Why Respect is standing as ‘Left List’ in London

But she has not been allowed to describe herself as a Respect candidate on the ballot paper for the 1 May London elections.

This is because Respect’s nomination officer is Linda Smith, one of the architects of last November’s breakaway that set up Respect Renewal.

Despite the fact that Respect’s national conference voted last November to replace Linda Smith, the Electoral Commission has said that its role doesn’t include ruling on who should be officers in a political organisation. Without an outside decision or a signature from Smith herself it will not accept any changes.

Smith still refuses to accept the conference decision. She refused to allow Carole Vincent or Barry Hill to put Respect next to their names in last month’s council by-elections in Leyton and Preston.

The Electoral Commission also refused permission to use any variation of a name involving Respect.

It remains to be seen whether the minority breakaway, Respect Renewal, will be permitted to use the name in what would be a clear breach of democracy.

Supporters of Respect will now stand as the Left List in the upcoming London Assembly and mayoral elections.

“The Left List is how we will be campaigning in this election,” said Lindsey German. “We have an enormously strong collective of candidates and will be standing in the mayoral race, the London-wide party list and in every geographical constituency.”

Councillor Oliur Rahman says, “Some 20,000 people have seen our YouTube appeal and we are looking forward to a very high level of grassroots involvement in our election.

The Left List has launched a new logo for the campaign that will appear on the ballot paper.

“The red star design is unique and a reference to the left tradition in which Respect stands,” said Respect’s national secretary John Rees.

“The star design also refers to the affinity that Respect’s Left List has to the European Left Party and the highly successful Left Party in Germany.” 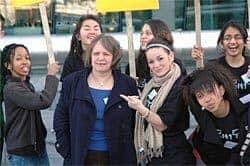