Why the government and regulators are also to blame

This article is over 12 years, 9 months old
The scandal in Mid‑Staffordshire Hospitals Trust exposes how the bodies responsible for overseeing the NHS are so committed to implementing government "reforms" that they fail to protect the public.
Downloading PDF. Please wait...
Tuesday 24 March 2009

The scandal in Mid‑Staffordshire Hospitals Trust exposes how the bodies responsible for overseeing the NHS are so committed to implementing government “reforms” that they fail to protect the public.

Why, for example, was Mid‑Staffordshire NHS Trust granted foundation status in February last year – months after the alert over excess deaths had been raised?

The Healthcare Commission says that Monitor, the body in charge of awarding foundation trust status, had not even asked if the watchdog had any concerns.

The Healthcare Commission is itself compromised. It has pioneered “light touch” regulation of hospitals that relies on self-reporting, rather than on inspections.

And what of the “strategic health authorities” that are supposed to oversee management practice at the NHS trusts in their area?

Cynthia Bower, who was chief executive of the West Midlands Strategic Health Authority from 2006, led the organisation with responsibility for checking Mid-Staffordshire NHS Trust and Birmingham Children’s Hospital during their worst years. Her authority saw no reason to investigate either hospital.

Next month Bower will become the head of the new super-regulator, the Care Quality Commission, when it takes over from the Healthcare Commission.

Her predecessor at the strategic health authority, David Nicholson, also saw no reason to sound the alarm. Today Nicholson is the head of the NHS.

Last week Gordon Brown said he apologised to “all those people who have suffered from the mistakes that have been made in the Stafford hospital”.

But it was the government that offered incentives to NHS managers to seek trust status. It was health ministers that put on the pressure to make huge budget cuts. Had they not chosen to do so, up to 1,200 patients who died needlessly might still be alive today. 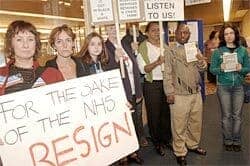