Will Brown’s plan stop the suffering?

Will Brown’s plan stop the suffering?

CHANCELLOR GORDON Brown was showered with praise last weekend for his new initiative on debt. Instead he should be criticised for continuing to be at the centre of the countries which are bleeding the Third World dry.

Brown revealed his plan at a rally of Jubilee 2000 anti-debt supporters in London last weekend. They were meeting to mark the end of the year 2000 campaign, and to launch new campaigns. Brown’s statement sounds good. He said that Britain will “renounce our right to receive any benefit from the historic debt owed by all the 41 most indebted countries.

From today all debt repayments received by us will be held in trust for poverty relief, paid when poverty reduction plans are agreed.” This means the poorest will still have to pay the debt but the British government will place it in a special account. It will be returned once Brown, the International Monetary Fund (IMF) and World Bank have decided those countries have met the neo-liberal conditions of privatisation, cuts in public spending and less controls on business.

The 41 countries chosen by Brown presently pay very little to Britain. Their debt is 1.6 billion and last year their repayments were just 29 million. If Brown had included other slightly less wrecked countries it would have meant much more.

Nigeria, which is also pressing for debt relief, pays more than two and a half times as much every year as the 41 countries combined on its debt of 3.7 billion. Brown’s statement will make very little difference to people in the Third World even if it is fully carried out. Ghana, Burkina Faso and Benin, three debt-ridden African countries, are included in Brown’s new plan.

If Brown wants to help Ghana or Benin or Burkina Faso he has to get IMF and World Bank policy changed. Instead he backs up these bodies, which continue to demand debt repayments and impose neo-liberal economic policies. Last weekend’s 3,000-strong Jubilee 2000 demonstration was pleased that Brown had been forced to at least look as though he was taking action. Top figures like pop star Bob Geldof were euphoric. He said the British government were no longer “spivs, bailiffs and repo men” to the world’s poor. Other protesters were less happy. Alan Wilson from Leeds told Socialist Worker, “We have seen so many promises from the world’s big leaders which mean nothing when it comes to it.They betrayed the promises made at the G7 Cologne summit and still 19,000 children die every day because of debt.”

Margaret Finch from Dorset said, “Every debt promise is combined with more control over the economies of the poor countries. The policies which the rich demand mean more suffering and death.”

The march was full of determination to keep the anti-debt campaign going. Kwesi Owusu, head of Jubilee 2000’s Africa Initiative, said, “This is a moment of renewal, not closure.” Charlotte Mwesigye from Uganda was cheered when she said that taking off the shackles of debt means “clean water, the roof on a school, life for those who need a hospital. In the next hour 792 mothers will be wailing for their dead children. We must remember how much there is still to do and dedicate ourselves to be part of it.”

TWO organisations are now taking on parts of the work previously done by Jubilee 2000.

Argentina and the IMF

MILLIONS OF workers shut down Argentina in a general strike against the impact of debt last month. Argentina has a vast debt of some $123.5 billion, Latin America’s biggest. In order to pay interest Argentina has to borrow more money at interest rates higher than those on its debt.

Because of this Argentina is caught in a debt trap. The Argentinian government has done everything the IMF and world bankers have demanded in recent years. Its public debt is only 49 percent of gross domestic product (GDP). This is well below the 60 percent demanded of European Union countries by the Maastricht treaty.

Earlier this year the government imposed a series of harsh austerity measures to placate international financiers. Despite this bankers have become worried that Argentina won’t be able to pay its billions of dollars of debt interest next year. These jitters sparked a financial crisis and the IMF, backed by the US government, stepped in. The government has agreed a deal with the IMF to borrow up to $20 billion.

Already 13.2 million people, some 40 percent of the population, are living below the official poverty line. In areas such as the northern Corrientes province almost half the population now have to survive on less than $2 a day. All three trade union federations called the strike, which lasted for 36 hours on 23 and 24 November. It won near-universal support and paralysed the country.

Transport workers, teachers, health workers, civil servants, bank workers, factory workers and many more groups all joined the stoppage. The strike is likely to be the start of a prolonged battle as the government tries to do the bankers’ bidding and push the austerity measures through.

AFTER Gordon Brown’s statement, and AFTER the full debt initiatives are delivered by the world’s richest governments:

1. Poor countries still pay $25 million a day to the bankers.

2. Senegal in Africa pays $149 million in debt, while spending $24 million on health and $55 million on primary education. One in eight children dies before they are five. Life expectancy is 52 years.

3. For every $1 in grant aid to developing countries, $13 goes back to lenders of debt.

4. All the debts of the 52 poorest countries could be cancelled at a cost of $71 billion, equal to 20 days of world military spending, saving the lives of around six million children a year.

5. The debt payments of Zambia in Africa will rise from $142 million to $197 million a year. It will spend $70 million on education and $76 million on health. Twenty percent of the population have HIV infection or AIDS. 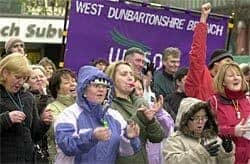