Will Tories benefit from the crisis?

Will Tories benefit from the crisis?

LABOUR’S VANISHED lead over the Tories in last weekend’s opinion polls will have sent a shiver of fear through millions of people around the country. It will also have reinforced the view widely expressed on the left that the fuel crisis, if not actually engineered by the Tory party, will work to its advantage.

William Hague certainly seems to think so, to judge by his description of the fuel protesters as “fine, upstanding citizens”. There are two problems with this analysis. The first is that core sections of big business were deeply hostile to the fuel blockades.

In a leader written before the blockades were ended, the Economist raged against the return of “bully-boy tactics” reminiscent of the bad old days of the 1970s.

After the farmers and road hauliers had claimed a ‘moral and just victory’, the Financial Times declared: “For Britain it is a hollow victory. Pressure groups have learnt it is remarkably easy to hold the country to ransom. The French tactics employed by the protesters show the way the UK is looking to continental Europe, but it seems to have developed a taste for the worst continental practices… In future the police must arrest anyone blockading the roads without further delay.”

“It’s open season for anyone who despises Big Business,” complained Richard D North of the Thatcherite Institute of Economic Affairs, writing in Sunday Business. Some on the Tory right certainly have tried to exploit the crisis by backing the protesters.

Last week John Redwood, who is in charge of the Conservative Parliamentary Campaigns Unit, called on the government to cut fuel tax by 5p a litre.

Tory party chairman Michael Ancram slapped him down. According to the Financial Times, “a senior member of the shadow cabinet said it would be irresponsible to demand that the government capitulate to the protesters.”

The second problem for the Tories is that big business doesn’t trust them. Whatever the small fry may think, the big battalions of the ruling class have decided that Britain should join the euro, and probably sooner rather than later.

In the Tories they are confronted with an official opposition that is increasingly dominated by forces that are not just anti-euro but anti-European. Various loony schemes like British withdrawal from the European Union and membership of the North American Free Trade Agreement are being seriously canvassed on the Tory right.

As long as the Thatcherite lunatic fringe are making the running on Tory European policy, the leading elements in the ruling class won’t touch them with a barge pole. In New Labour they have a government that wants to join the euro, even though it is divided over tactics.

Moreover, Blair is naively enthusiastic about big business, has stuffed every conceivable quango with its representatives, and is trying to privatise everything that isn’t nailed down.

This doesn’t mean that the bosses are uncritical of Blair. Last weekend Digby Jones, director general of the Confederation of British Industry, laid into the government for failing to anticipate the fuel crisis: “The images of blockades are not the sort of thing the boardrooms of Tokyo and New York want to see when they are thinking about where to put down a new business.”

Once again this indicates that-whatever different representatives of big business may think about the level of fuel taxes-they are united in hostility to the methods of direct action. The fuel crisis and its aftermath will certainly exacerbate the conflicts within New Labour itself.

The Observer has been serialising Andrew Rawnsley’s book documenting the bitter divisions between Tony Blair and Gordon Brown. These have nothing to do with principle or policy, but concern merely personality and ambition.

The Blairites will seek to put the blame for the fuel crisis onto Brown. They will claim that his insistence on keeping fuel taxes high is part of the same pattern as the health spending squeeze and the miserly treatment of pensioners. “If there’s an immediate scapegoat for this crisis, his name is Brown,” wrote Peter Preston in Monday’s Guardian.

Socialists should avoid getting drawn into these factional squabbles. The fuel crisis showed how the Blair government is creating mass opposition to its policies. What matters is ensuring that in future this opposition is politically dominated by the left. 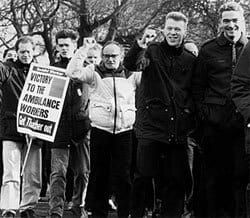