Willie Walsh’s last job: ‘Aer Lingus should be a warning’

Willie Walsh used to be the top boss at Aer Lingus where cabin crew last week accepted a deal that means 230 compulsory and 440 voluntary redundancies.

It also means pay cuts of 10 percent and worse conditions for those left behind.

It’s a nightmare vision of what Walsh would like at BA, and why this battle is so vital.

One former Aer Lingus worker told Socialist Worker, “Walsh learned his technique at Futura, Aer Lingus’ Spanish charter airline, in 1998. He took on the unions and won, so they imposed him on us.

“Walsh specialises in turning airlines into cut-throat companies, driving down conditions by any means in the pursuit of profit.

“He wanted to transform the airline to match its anti-union low cost rival Ryanair.

“He tried to take us on one group at a time.

“We had a three-day lockout in 2002 and a whole series of bitter disputes.

“The problem was that we more often than not fought with one hand tied behind our back.

“The union leaders were overwhelmingly in favour of partnership with the bosses.

“But the partnership was all one way—we gave and they took some more anyway.

“In the end he cut a third of the workforce because we didn’t come out together.

“So last week you saw what Walsh’s legacy is. The latest bunch running Aer Lingus pushed through £80 million worth of cuts.

“The workers had rejected the attacks but then they threatened mass sackings and the unions caved in.

“This is a cowardly surrender. They claim you can’t fight because of the recession, before it was because of partnership. But if you don’t fight you lose.

“BA cabin crew have a fight on their hands. Aer Lingus should be a warning about what happens if you don’t win.” 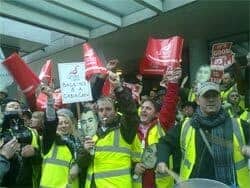 Union can beat BA—if it shuts down Heathrow