EXPRESS JOURNALISTS SPEAK OUT AGAINST…

THE DAILY Express has been crusading against asylum seekers. For seven issues in a row it ran headlines designed to appeal to the most bigoted ideas about refugees. But, as an EXPRESS JOURNALIST explains, staff at the paper have begun to speak out against the witch-hunt.

They were passed by the Express and Star National Union of Journalists chapel (union branch).

The chapel meeting passed an emergency resolution condemning Desmond for the sustained hysterical and racist campaign he is running in the Express against asylum seekers.

This resolution made its own headline news on BBC’s Newsnight programme, which debated why Desmond was running such a disgusting campaign.

The resolution hopefully made it clear that most journalists at the Star and Express are not happy at being used to whip up hysteria against asylum seekers.

The Express has run front page headlines such as “Asylum Invasion” and “Refugees, Run For Your Life”.

The newsdesk had wanted to go with different stories. Each time Desmond insisted they use yet another asylum seeker story.

Some of the coverage started off as fairly sympathetic accounts but became massively distorted by the screaming, inflammatory headlines.

Journalists reported at the meeting that they have become increasingly frustrated over the past weeks at Desmond’s orders to write biased and racist stories.

Some insiders claim he has been heard boasting that the paper’s negative stance on asylum seekers has boosted sales.

The chapel passed the following emergency resolution to distance ourselves from Desmond’s campaign:

“This chapel expresses its disapproval of the sustained campaign against asylum seekers.

We find this campaign surprising, particularly when we know the proprietor himself is Jewish and should understand the problems of racism, which are becoming endemic in British society.

The media has an important role to play in a democratic society and should not distribute or whip up confrontational racist hatred in the pursuit of circulation.”

It seems Desmond is happy to disregard the dangerous consequences of whipping up race hatred, but is himself a sensitive soul when it comes to his ego being dented.

A cartoon was used to advertise the chapel meeting, originally called to discuss the closure of the canteen.

The hundreds of posters showed Desmond sat at his desk while being attended by his liveried butler, who delivers a banana to him daily on a silver platter.

The chapel committee were summoned to a meeting with management and the company lawyer, and asked to take the posters down. We refused.

Management then asked the chapel’s permission for the butler and a secretary to take the posters down.

Later the butler was seen wheeling trolleys of champagne to Desmond’s office, tearing some of the posters off the walls as he went.

The NUJ chapel meeting last Wednesday decided to carry on with our cartoon campaign and passed the following resolution:

“This chapel condemns the unilateral decision by management to close the canteen after 5pm and at weekends.This has been done without consultation or without agreement of the staff or their representatives.

We call on management to rescind immediately this decision and to keep the canteen open during working hours.”

If this doesn’t happen we want a ballot on industrial action.

There is some more news that might make Desmond’s banana stick in his throat.

Some 24 of the 30-strong workforce at OK! magazine (Desmond has moved his pet publication into the Express building) attended an NUJ recruitment meeting last week in a nearby pub.

This is another sign that his bullying and campaign against refugees will not go unchallenged.

English test is the language of racism

HOME secretary David Blunkett is stoking the anti-refugee atmosphere in Britain. He backed the call on Friday of last week by immigration minister Lord Rooker for English tests for asylum seekers and immigrants.

Such a “debate” will only give comfort to racists, and the press and politicians who scapegoat refugees.

Most of the immigrants into Britain come from mainly white former colonies, according to statistics from the Organisation for Economic Cooperation and Development. In these countries English is promoted as the dominant language.

The single largest groups are from the US and Australia.

The French consulate in Britain has around 60,000 nationals registered in the country. It estimates the true number of French people living in Britain could be nearer 180,000.

This New Labour proposal is not aimed at these people. It has a racist core. It will target people who are least likely to have learned English, and come from the poorest areas of poor countries such as Pakistan and Bangladesh.

In the wake of the Bradford riot Ann Cryer, Labour MP for Keighley in West Yorkshire, called for English tests directed at wives and husbands from Pakistan and Bangladesh coming to live with their spouses in Britain. She claimed an English test would “stop the importing of poverty”. Lord Rooker claims English lessons will help immigrants find work.

But black people who were born in Britain, and who speak perfect English, suffer higher levels of unemployment than the average.

That is down to racism. Blaming the few people who are allowed to come from Pakistan and Bangladesh to Britain for poverty here will intensify that racism and lead to higher levels of unemployment among black people.

If New Labour really cared about alleviating poverty among newcomers to Britain it would allow asylum seekers, many of whom already speak English fluently, to come here and to work.

Instead its proposals mean more hysterical headlines in papers like the Daily Express, and more racist attacks on asylum seekers and black people. The English test proposals will also fuel the growing opposition to New Labour’s treatment of refugees.

It is set to be a key issue at the party conference in September, with union leaders and Labour Party members already demanding the government retreats over its attacks on refugees.

EDL are humiliated in Wakefield 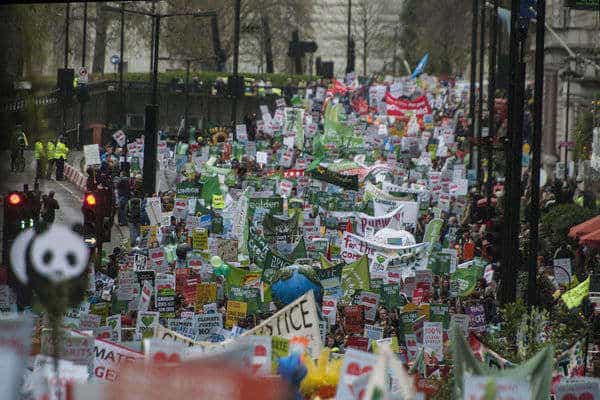