Work scheme boss has to quit two posts in one week

Emma Harrison, the government’s “back to work tsar” and boss of private firm A4e, was forced to resign twice last week.

First she quit as Tory “family champion” and then as chair of the company as the scandal kept growing.

It started when it was revealed that Harrison, as A4e’s largest shareholder, paid herself a dividend of £8.6 million—all money from government contracts.

Then former A4e staff were arrested over a series of allegations of fraud. And it was revealed the firm has had to pay back money five times after investigations.

The company has millions of pounds of government contracts to push unemployed people into work.

It was even accused of forcing people to work unpaid in its own offices.

It is also alleged that Harrison had been renting out her own stately home and other properties to the state-funded firm—for a total of £1.7 million. 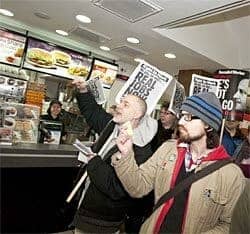