•Prices are rising at 3.4 percent a year in Britain. At the same time the typical public sector pay deal is running at less than 0.5 percent.

In the private sector “rises” are typically between 1 and 2 percent—although a third of workers face a total freeze.

•The number of people unemployed in Britain rose 43,000 to 2.5 million during the three months to February. 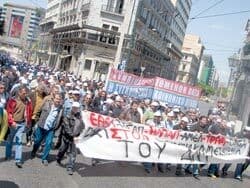 Greek crisis could be Britain's future

Bosses' paper reveals what the cuts would mean