Workers in battle to win dignity

This article is over 17 years, 8 months old
\"THEY TREAT us like slaves. It is almost criminal.\" Those were the words of one striking worker at the Euro Packaging factory in Highgate, Birmingham. In the first week of a 48-hour walkout and overtime ban, expected to last for the next eight weeks, up to 200 workers walked out over poor pay, working conditions and threatened redundancies.
By Salma Iqbal
Downloading PDF. Please wait...
Saturday 15 May 2004

“THEY TREAT us like slaves. It is almost criminal.” Those were the words of one striking worker at the Euro Packaging factory in Highgate, Birmingham. In the first week of a 48-hour walkout and overtime ban, expected to last for the next eight weeks, up to 200 workers walked out over poor pay, working conditions and threatened redundancies.

Members of the Graphical, Paper and Media Union (GPMU) voted overwhelmingly in favour of strike action, with 132 in favour and just one against. The stories of workers employed by Birmingham’s plastic bag tycoon Abdul Alimohamed are reminiscent of those from factories during the Victorian era. Workers are expected to work up to 84 hours a week and are paid a meagre wage of £4.50 an hour, with no overtime rate except on Sundays, and a night shift allowance of only £5 a night.

One striker said, “I have been working for this company for the past five years. During this period I have not received a single pay rise. I know others who have worked here for 12 years. They started on £4.50 an hour and they are still receiving £4.50 an hour.”

Management at Euro Packaging take advantage of the fact that the majority of employees are recent immigrants from Pakistan and India who have families to support in Britain.

Workers only receive 20 days of holidays a year. This includes eight annual bank holidays. They cannot choose when to take their remaining 12 days leave-this is dictated by the company instead.

Until recently they were entitled to four weeks unpaid leave-now this has been reduced to two weeks. This has serious repercussions for a largely immigrant workforce who may have to take leave to visit family abroad.

Another striker commented, “They treat us like animals, not humans. It is only a week ago that we got a water cooler-before this we had to use the taps in the toilets for drinking water. We want our rights and to be treated with respect.”

Attacks on the workforce intensified when members of the previously un-unionised workplace became involved with the GPMU and demanded union recognition. Management have refused to recognise the union, even though the majority of the workforce belongs to the GPMU.

Management are also moving machinery to other factories. They have sacked 18 people and are threatening to sack 49 more. They have also threatened to move jobs abroad. The strikers are demanding a reduction in working hours to 37.5 hours a week, union recognition, the reinstatement of those unfairly sacked and the removal of the threat of further redundancies. In an attack on the GPMU, Euro Packaging has claimed that officials are being unreasonable and that the company cannot afford to give in to the demands of the strikers. Management claim that this will cost them £1 million, which will result in further redundancies.

This is laughable-company owner Abdul Alimohamed is worth £105 million, with his fortune growing by £10 million in the past year alone. According to a popular rich list, he is the richest Asian in the Midlands. “He should treat us like his own family,” said a GPMU shop steward at the factory. “It is because of us that Mr Alimohamed is where he is now. We built the company-without us he would be nothing.”

Euro Packaging supplies plastic bags to leading supermarkets and high street stores including Tesco, Asda, Sainsbury’s, Gap and Woolworths. Kathy Brookes, a GPMU official, said, “It is a shame that these workers earn less than the people who stack shelves for these supermarkets. All we want is justice and to be treated with dignity and respect.”

Union officials are set to meet with management this week. One senior union rep said, “People have been out on strike all day. Only one person has been inside the factory to work. We are optimistic about the outcome.”

There was a good mood on the picket line, with strikers shouting, “What do we want? Respect!” and “What do we want? Union!” Managers and directors were booed and jeered at as they left and entered the building. The level of support from local people was high, with many people bringing down food and drink for the strikers.

Save Our Sociology protest at Birmingham university 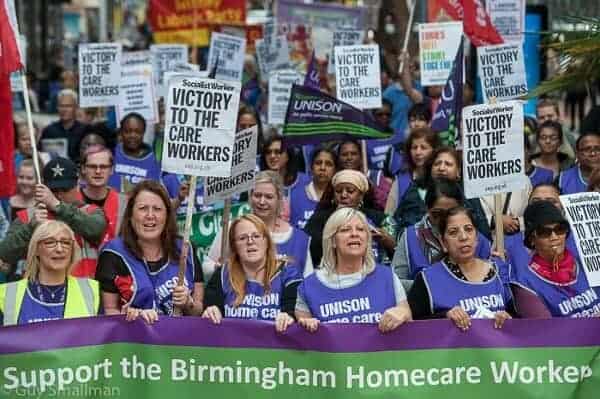