Workers in frontline back the Organising for Fighting Unions conference

This article is over 15 years, 4 months old
The striking Merseyside firefighters are the latest group of workers to support the Organising for Fighting Unions conference to be held in London on Saturday 11 November.
Downloading PDF. Please wait...
Saturday 16 September 2006

The striking Merseyside firefighters are the latest group of workers to support the Organising for Fighting Unions conference to be held in London on Saturday 11 November.

The brigade committee of Merseyside FBU voted unanimously to back the conference on Monday of this week – the day before the start of their second eight day strike against cuts.

neo-liberal “modernisation” in public services, how to defend pensions and wages, and what sort of political representation workers need.

This branch includes postal workers at a mail centre in Exeter who recently walked out unofficially and won a victory against management bullying.

The November conference has been initiated by Respect with the aim of drawing together a wide layer of activists from across the trade union movement.

CWU North and North West London have voted to send six delegates, while the CWU Oxfordshire branch which covers the workers currently in dispute has voted to back the conference.

Speakers include RMT general secretary Bob Crow and John McDonnell, the left wing Labour MP who is challenging Gordon Brown for the leadership of the Labour Party.

Registration fee is £10 per delegate 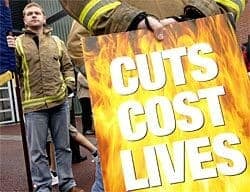 Merseyside firefighters: a battle for us all