This article is over 9 years, 11 months old
Arthur Scargill led the National Union of Mineworkers during its epic strike against Margaret Thatcher’s attempts to smash the union in 1984-85. For this he remains a heroic figure to a generation of activists.
By Sadie Robinson
Downloading PDF. Please wait...
Tuesday 14 February 2012

Arthur Scargill led the National Union of Mineworkers during its epic strike against Margaret Thatcher’s attempts to smash the union in 1984-85. For this he remains a heroic figure to a generation of activists.

He also played a key role in the 1972 miners’ strike when he was a miner and union rep in Yorkshire. Crucially he called on other workers to strike in solidarity with miners.

Thousands of workers marched on Saltley coking depot in Birmingham, which had been undermining the strike by supplying coke—and forced police to close the gate.

Scargill joined a rally to mark 40 years since the Battle of Saltley Gate last week at the site of the plant (see below).

He told Socialist Worker, “The importance of what happened at Saltley on 10 February 1972 cannot be overstated.

“Miners were being battered by the forces of the state.

“I said workers had a choice. They could stand on the sidewalk—or march into history.

“To their eternal credit they responded to my call for strike action. For the first time in more than 40 years workers in other industries recognised that they could no longer stand by.

“They came out on strike, joined us on the picket line and closed the gate at Saltley.

Politicians and the right wing press today claim that class struggle is dead.

Ken Capstick was also a Yorkshire miner. He told Socialist Worker, “Some people said workers wouldn’t fight in the 1960s and they said it in 1972. But people do fight.

“I see people doing it in Greece, Spain, Portugal and Italy, and across North Africa. I see it in America and here in Britain.”

Scargill said, “Workers are facing vicious attacks on their living standards. In 1972 we showed what working class ­solidarity really means.

“We didn’t build a movement by complying with laws designed to stop us taking action. We built it by resisting.”

Capstick pointed to the hypocrisy of many of those who lined up to condemn rioters last summer.

He said, “When people take to the streets who have no opportunities or jobs, they may not appear to have any aims or direction.

“But when working class people fight back the last thing we should do is condemn them.

“Bankers like Stephen Hester and Fred Goodwin are the real looters.”

The battle of Saltley Gate showed the potential power of workers and the importance of rank and file organisation.

Scargill said, “Union leaders today shouldn’t be looking to do deals or compromise.

“They should stop talking about fairer capitalism.

“The answer to the problems people face in Britain is simple. Get rid of capitalism and establish a socialist society.”

Remember when we shut the gates

Around 100 people rallied at the site of the Saltley coking depot in Birmingham to mark 40 years since strikers forced it to close its gates.

Norman Goodwin was a shop steward in the AUEW union who was there. He described the event as “the most important class victory in Britain”.

Norman told the rally, how a mass meeting at his factory voted to join the picket with a show of hands.

“We clocked in. No green buttons were pushed. No machinery started. At 7.30am the bell rang and everyone walked out.

Frank Parker was a teacher who was at Saltley.

“We were ready for a scrap,” he told Socialist Worker. “People just became so many that they outnumbered the police.

Mary Pearson, vice president of Birmingham trades council, told Socialist Worker, “It really inspired me when they closed the gates. I thought the revolution was round the corner!

“I’m a child of the welfare state—and they’re trying to take it all away.

“But I think people are beginning to get very angry and I’m certainly optimistic about the struggle.” 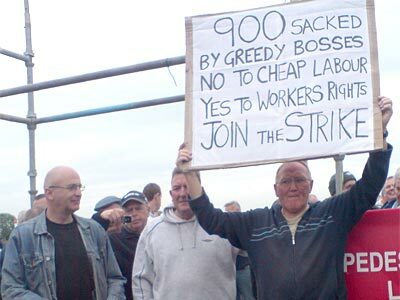