Refuse workers in Rugby, Warwickshire, will continue their walkout after the council offered them a poor pay offer. The council offered to raise drivers’ maximum annual wage from £23,400 to £30,940 and street cleaners from £19,200 to £24,587. Workers are still angry that, despite these increases, they still will remain some of the lowest paid in the area.

Meanwhile, refuse workers for Wealden council, Sussex, are continuing strikes until 11 June after more than three weeks on the picket line.  The GMB union members, who are outsourced to Biffa, are battling for better pay.

Dave Lennon, GMB union rep, told Socialist Worker, “I’m on £9.50 an hour at the moment, the minimum wage, and if we got £12.50 it would help with the cost of living. He called for “solidarity and support, because we’re all in it together”.

Meanwhile, rubbish could pile up at the Isle of Wight festival as refuse workers ballot for strikes. It closes on 27 May, meaning strikes could begin as early as 13 June.

Drivers and transport clerks working for logistics giant GXO, on the outsourced Co-op supermarket delivery contract, are set to strike over pay.

Over 330 workers in the Unite union based at the company’s depot in Elton Head Road, St Helens, Merseyside are involved in the dispute. They voted 97 percent vote in favour of action.  The union has notified 40 strike days, beginning with a 48-hour strike next Tuesday.

The drivers deliver to 466 Co-op stores spreading from the Lake District and Leeds in the north, as far south as Hereford and Aberystwyth in west Wales.

Unite union members could join the fight over pensions at the University of Dundee. Over 100 workers began a strike ballot this week, with action planned for the start of the new academic year in September.

University bosses want to close the Defined Benefits Pension Scheme to grades one to six and replace it with a worse system dependent on stock market gyrations. Unison union members have already held a series of strikes over the issue. 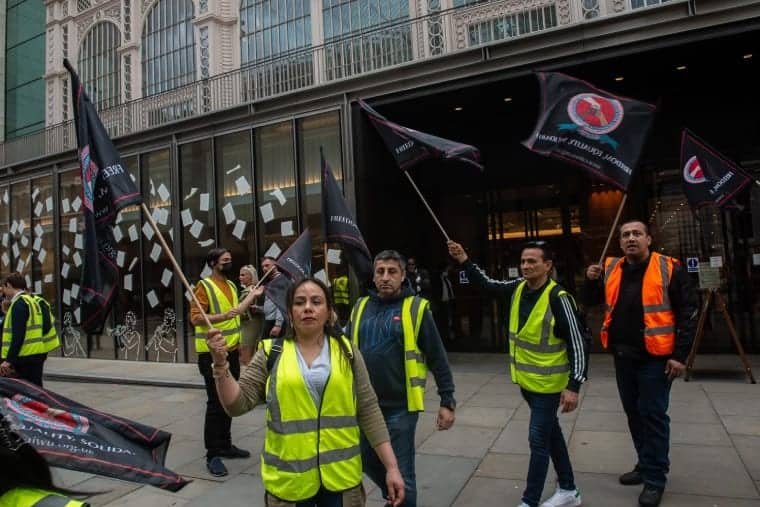 Cleaners and porters in the Caiwu union who are outsourced to DOC Cleaning protested last week over pay and working conditions at London’s Royal Opera House (Picture: Guy Smallman)

Post Office counters workers are set to walkout on Saturday of next week over pay. Supply chain and admin workers will down tools on Monday 6 June.

This is the second set of nationwide strikes by the CWU union members. “The latest offer is for a 2.5 percent rise with effect from 1 April 2022, plus a £500 lump sum,” said CWU assistant secretary Andy Furey. “Not only is this way below the April 2022 RPI inflation figure of 11.1 percent.

“It also offers absolutely no back pay for whole 2021-22 period—for which the Post Office is imposing a pay freeze.”

Around 50 local campaigners came together in Broadstairs, Kent, last Saturday for a cost of living protest outside the constituency office of Tory MP Craig Mackinlay

It was called by Thanet Left and supported by Kent Climate Action Coalition. Mackinlay is opposed to a windfall tax on the gas and oil companies’ profits and is also the leader of the Net Zero Scrutiny Group of Tory MPs. It opposes effective climate action. 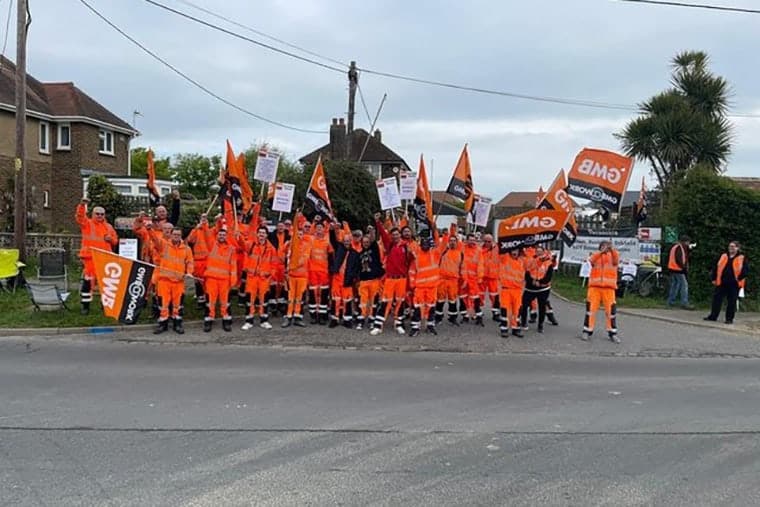