This article is over 10 years, 4 months old
Journalists in South Yorkshire have entered their fifth week of an all-out strike.
Downloading PDF. Please wait...
Tuesday 23 August 2011

Journalists in South Yorkshire have entered their fifth week of an all-out strike.

The 25 members of the NUJ union, who work for a variety of local papers owned by Johnston Press, are trying to force management to retreat on job and pay cuts, and attacks on workers’ conditions.

Andrew Hewitt, news editor at the Doncaster Free Press, told Socialist Worker, “Most people here are on strike for the first time, including me.

“Obviously it’s a big financial burden to strike for this long, but it is something we all talked about and decided to go for anyway.

“And the support we’ve had from all across the country has been great.

“The papers that have been produced since we’ve been on strike aren’t as good as they could be. There have been lots of mistakes and most of the stories have appeared in other papers first.”

Invite a journalist to your union meeting, do a collection and send them a message support. Send messages of support to [email protected] and donations to account name DFP NUJ Chapel, no: 35630388, sort code: 60-06-39 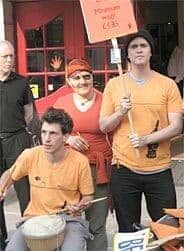 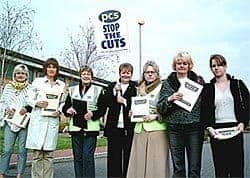