You’ve lost in Iraq, Blair: get the troops out now

This article is over 15 years, 3 months old
"There are only bad options for the coalition from now on," said Sir Jeremy Greenstock this week. He was the deputy ruler of Iraq for much of the occupation and has defended British policy down the line.
By Lindsey German, convenor, Stop the War Coalition (personal capacity)
Downloading PDF. Please wait...
Saturday 28 October 2006

“There are only bad options for the coalition from now on,” said Sir Jeremy Greenstock this week. He was the deputy ruler of Iraq for much of the occupation and has defended British policy down the line.

When he and the head of the British army say things are getting worse, you can bet the situation is a disaster.

The warmongers are more isolated than ever. The worsening conditions in Iraq are leading them to fall out among themselves.

Some are saying that troops should be withdrawn from Iraq in order to bolster the occupation in Afghanistan. But that too is a war the occupiers can’t win.

Meanwhile opinion polls this week show that a clear majority here want British troops out of Iraq. One poll in The Independent shows 62 percent of those asked want the troops out as soon as possible, and in a Guardian poll 61 percent want them out by the year’s end.

The anti-war movement argued five years ago – when it was formed – that invading and occupying countries to supposedly defeat terrorism would be counterproductive.

The world today is more dangerous than before, far more people have died, and Britain and the US are more hated than five years ago. The casualty rate of US troops is shooting up in Iraq, and British troops are under threat in Iraq and Afghanistan.

The recent Lancet report demonstrated deaths in Iraq on a scale undreamt of when the warmongers told us they would bring peace to that country.

Foreign secretary Margaret Beckett and Tony Blair say we have to “keep our nerve” in Iraq, as if we were talking about a trapeze act in the circus. The truth is the only reason we don’t withdraw is to save the face of the two arch warmongers, George Bush and Tony Blair.

We can’t allow their policies to continue – they have been a disaster for the world.

That means we have to pull the troops out of Iraq and Afghanistan, and to accept that it is up to their people to run their own countries, not for the Western imperialists to determine what is and isn’t an acceptable government.

More than that, we need to change the world so that its wealth and resources go to dealing with the economic and political inequalities that exist, not to making war against some of the poorest countries. That’s why the movement against war and the fight for a better world are so closely connected.

Tell Gordon Brown to get the troops out

US soldier refuses to fight in Iraq 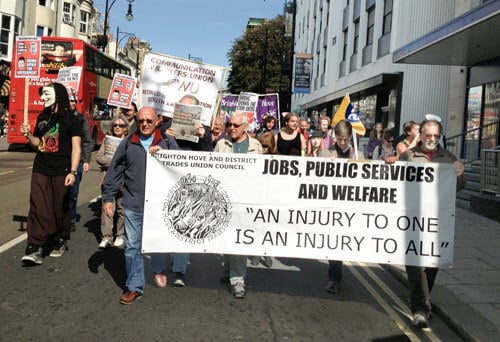 Workers' meetings all over Britain plan for 20 October