16 February 1968 and Aretha Franklin was in Detroit as the mayor declared it Aretha Franklin Day, when Martin Luther King stepped up on the stage to present her with a special award from the Southern Christian Leadership Conference.

It didn’t really matter that he had laryngitis and was unable to speak. His actions demonstrated how much Aretha had come to symbolise the cry for freedom, and how central she was to shaping black identity in the 1960s.

Aretha Franklin, who died on Thursday, had a beautiful, distinctive voice that was first heard in her father’s baptist church. She grew up in Detroit surrounded by gospel singers such as Clara Ward, Mahalia Jackson and Sam Cooke, and learned to play the piano by ear. 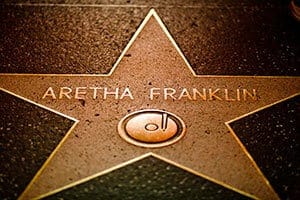 From the age of 12 she was touring with other gospel acts. Although financially pretty secure, Aretha’s early years weren’t easy. She had her first child aged 12, had a second child and had left school by 16. She had a violently abusive marriage but Aretha was no victim, and this came out in her songs.

Aretha demanded Respect for black people in the US when she made Otis Redding’s song her anthem. Ebony magazine in 1967 declared it the summer of ’Retha, Rap and Revolt, linking the Queen of Soul with Black Panther H. Rap Brown and inner city rebellions.

Aretha was no stranger to the Civil Rights Movement – her father had been one of the main organisers of Detroit’s Walk To Freedom where King first spoke of his dream. But she didn’t initially set out to be an overtly political artist.

However, as she said herself, “I suppose the revolution influenced me a great deal.” Not only did she cover songs such as People Get Ready, A Change Is Gonna Come and Young, Gifted And Black. She also understood why Respect chimed with the movement for liberation.

Behind the scenes, Aretha gave money to King and publicly she did fundraising concerts with, among others, Harry Belafonte and Joan Baez. When US radical Angela Davis was imprisoned, Aretha publicly offered to pay her bail saying, “Angela Davis must go free. Black people will be free.”

By the 1970s, Aretha no longer looked like the lounge singer of her very earliest appearances but instead had an afro and wore head wraps and African clothing. She epitomised the developing sense of confidence and black pride. 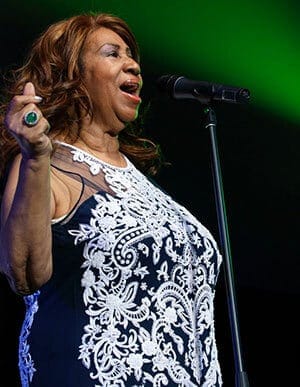 Similarly, Aretha found her real singing voice in 1967. When she first started singing outside the church, she had signed to Columbia records, but they didn’t know what direction to take her in.

She signed with Atlantic records in 1966 and producer Jerry Wexler took her to Muscle Shoals, Alabama, for a recording session. Although brief, it has gone down as one of the most important in musical history.

The session resulted in the single I Never Loved A Man (The Way I Loved You), and eventually the album of the same name.

About a decade ago, a double album of the Muscle Shoals session,Aretha Franklin: Rare and Unreleased Recordings from the Golden Reign, was released. If you haven’t already got them, go and buy both of these albums now.

This was followed by albums such as Lady Soul, Aretha Now and Spirit In The Dark, five consecutive top ten singles and the first of 18 Grammys. Aretha became the first woman to be inducted into the Rock and Roll Hall of Fame and Rolling Stone magazine declared her the greatest singer of all time.

Recorded during this period, Live At Fillmore West is one of the best live albums produced.

Recent decades haven’t been kind to Aretha in terms of album sales, although she was performing until recently. I saw her ten years ago and can still remember every minute of the gig, so fantastic was her voice.

And of course she sang at Barack Obama’s inauguration, which I’ve always hoped would mean a new generation would explore her music

Aretha Franklin offers us a vision of a history of struggle and helps us aspire to a future that could be very different. Even if she never articulated a commitment to civil rights, her voice and songs contributed to larger political and social movements.

Angela Davis said her legacy should not be “measured by political interventions in the conventional sense.

“Her creative work helped to shape and deepen a collective consciousness anchored in a yearning for freedom.” 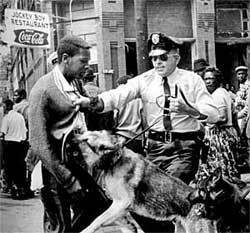 Class and the civil rights movement 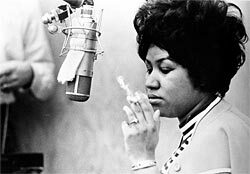