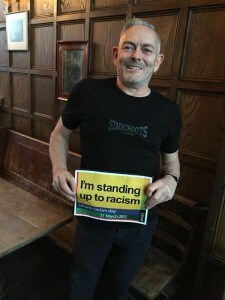 John supporting the Stand Up to Racism demonstration last March

John “Brad” Bradbury died unexpectedly aged 62 on Tuesday of this week. He was the drummer in The Specials, one of the most important bands of the late 1970s and early 1980s.

John was born in Coventry in the West Midlands in 1953.

He honed his drumming skills playing in pop covers bands around West Yorkshire.

We saw Bob Marley together at the Birmingham Odeon on 22 June 1976. It had a lasting artistic impact on him.

As John abandoned teaching in 1979, The Specials’ leader Jerry Dammers welcomed him home to Coventry in the drumming seat of the bands’ first line-up.

John was proud of The Special’s anti-racist and rebel politics. They stood out during times of rising fascism and Margaret Thatcher’s assault on working class life.

The Specials performed bouncing Ska covers and sardonic tales of treacherous love lives, but their music also addressed the big questions of the day.

One of their most important and evocative songs was Ghost Town. Written about mounting unemployment it came out just as riots tore through Britain in 1981.

And their single Free Nelson Mandela became an anthem for the Anti-Apartheid Movement.

As a multiracial band that blended Afro-Caribbean styles with Punk attitudes, The Specials had an immense impact on culture in Britain.

Their own Two Tone label, with its black and white chequered graphics, was one of the era’s symbols of a new social movement.

The Specials and other artists faced down Nazi attempts to bust up their gigs. Their politics brooked no compromise.

They headlined the 1981 Anti Nazi League Carnival in Leeds with black bands Misty and Aswad.

Most of the band reformed for reunion tours from 2009.

These gave another generation of fans an opportunity to feel their immense fun, energy and outrage.

John gave so much to the politics of resistance.

He is a big loss for many of us, but especially his wife Emily, son Elliott, the rest of their family and his band members. 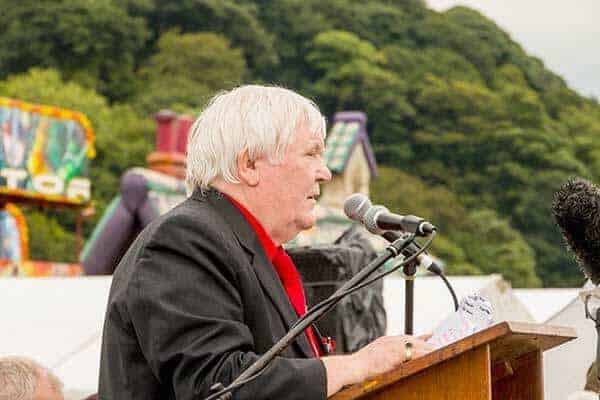