This article is over 11 years, 10 months old
Mike Graham sadly died on 15 September. He had been unwell for some time.
By Woolwich and Plumstead SWP
Downloading PDF. Please wait...
Tuesday 21 September 2010

Mike Graham sadly died on 15 September. He had been unwell for some time.

He was a stalwart of the anti-apartheid movement, particularly in Greenwich, south east London.

He was also an activist in Greenwich NUT union and North East London Polytechnic Natfhe.

He will also be remembered for his role in many other campaigns against war, cuts and racism.

Mike was a regular at Socialist Workers Party meetings and Marxism.

He will be missed.

Our condolences go to Gaelle and the family.

The funeral is at 9.45am on Monday 27 September at Eltham Crematorium, Crown Woods Way, London SE9 2AZ (near Falconwood railway station). 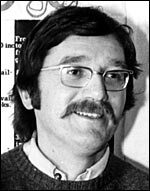