Tom Behan: The Story of a Man who stood up for the Masses

This article is over 11 years, 4 months old
As part of our tributes to Tom Behan, we are pleased to feature this appreciation by Carmen Casaliggi
By Carmen Casaliggi
Downloading PDF. Please wait...
Friday 24 September 2010

As part of our tributes to Tom Behan, we are pleased to feature this appreciation by Carmen Casaliggi

British born, Irish in origin and Italian by adoption, Dr Tom Behan, Senior Lecturer in Italian Studies at the University of Kent at Canterbury and an active member of the British Socialist Workers Party for over 30 years, passed away on 30 August 2010. The news of his death came to us with shock and surprise as he wished to deal with his illness privately. He was just 53 years of age.

Behan’s effect on both the historical and political worlds of Britain and Italy is, by all accounts, extraordinary. His many books on Italian history and politics – especially on Mussolini (2003), the Camorra (1996; 2002; 2004; 2009), the Mafia (2008), and the Resistance Movement (2009) are not only uncomfortable and disconcertingly powerful readings, but also memorable sketches written out of necessity by a man who stood up to Italian organized crime – someone who dared with courage and resistance to speak out, and did so for very many years, and with a profoundly powerful voice.

His work on the revolutionary theatre of Dario Fo (2000), on the evolution of the Italian Communist Party (1997), and a wide ranging of journal articles and book chapters attest to the unusual breadth of his knowledge and exacting scholarship.

As is perhaps to be expected from a man so committed to activism in support of human rights, Behan played an invaluable role in the protests in Genoa during the demonstrations against the G8 summit in 2001; his involvement was mobilized by the disproportionate scale of the violence and the murder of Carlo Giuliani at just 23 years of age.

In 2005 he was awarded the prestigious “Premio Nazionale per l’impegno Civile Marcello Torre” (National Prize for Civic Engagement) in Salerno, for the tremendous work carried out on the origins and development of The Camorra. More recently, he was engaged in making everyone aware of what was behind the life and work of Giuseppe Impastato, a Sicilian political activist who opposed the Mafia that would order his murder back in 1978.

He made regular media appearances; was involved in some public controversies and accepted several public appointments.

Exceptionally skillful at turning any perceived injustice into a political challenge, it comes therefore as no surprise that he occupied a most unusual position in academia almost unparalleled today, his name and views being familiar to a large non-specialist reading audience.

Despite being one of the most distinctive voices and authorities on recent Italian history and politics and having received numerous awards for his compelling work, Behan was regarded as an “outsider”.

In academic circles he was sometimes dismissed as “comrade” Behan, uncompromising and, for some, difficult to work with.

On the other hand, for us, people who knew him well, his colleagues and friends, this did not preclude an appreciation of the “other” Behan: Behan the author, Behan the lecturer, Behan the historian, Behan the intellectual.

The fact that many were impressed only by his tireless fighting and campaigning, should not obscure the rigorous scholarship of his work. Behan’s passionate and commanding voice; his heartfelt and vivid language, speak more powerfully to us than his long denied academic promotion: for his was a life and work of intensity and passion rather than of the conventional academic approach.

Obituaries and messages of condolences have been written since Behan’s death. Family, friends, colleagues, and students who admired both the man and the author were distressed by news of his passing. It is also a severe loss to the world of Italian Studies and for the culture of ideas in which he firmly believed.

The truth is that he did spend the majority of his life fighting against organised crime, be it via his courageous published work, his activist demonstrations or his lectures – all testimony of how much of himself he had invested in understanding difficult and dangerous realities, and relaying his understandings to his students.

Nor was he afraid to be outrageously controversial. He was always forcefully coherent with his own ideas and principles that he would never deny a fierce argument to anyone disagreeing with him. This had made us think he was indestructible.

As captivating an orator as he was, as charismatic as an Irishman should be, as magnetic as a real Neapolitan, and as determined as you would expect from a preeminent expert in his field, Behan was and will remain an inspiration, and this is how we should remember him.

He could speak about Mafia and Camorra for hours, in a perfect Italian, or even dialect, in such a way as to leave native speakers bewildered at his command of the language. He had time for anyone he met: family, friends, students, strangers even – a fierce, a passionate, a genuine, a loyal soul: a spirit for the masses. This says much more about him than a thousand descriptions of his books.

Behan took his doctorate from the University of Reading with a thesis on “The Italian Communist Party and the Working Class of the Porta Romana Area of Milan, 1943-48”.

This was followed by a lectureship at La Trobe University in Australia, and then at Glasgow, before moving to the University of Kent in 1996, where he also took up the position of Head of Department for several years.

Following the publications of Behan’s most recent books one is tempted to ask: “What will happen to the struggle against organized crime without his authoritative voice?”

A committed group of fellow academics is now working towards instituting the “Tom Behan Prize” – a scholarship made available to a dedicated student who intends pursuing research in this field of study.

Now Behan’s writing remains to bear witness to how history can be made secure and permanent, and therefore his teaching is there to increase knowledge and to communicate it to posterity.

Besides a passion for its history and politics, Behan truly loved Italy.

He made his semi-permanent move to Naples when he was still in his twenties, to then move to Milan to conduct more research work. Milan and Naples, the two cities which featured so prominently in his life and work, have also been the backdrop to his death.

Behan passed away in Milan. Like a modern Red Shelley (to mention Paul Foot’s book that he so much treasured in his library collection), Behan’s ashes will soon be dispersed, according to his wishes, on the island of Capri, near Naples.

It seems as if, paradoxically, he felt secure in laying the foundations of his life and writing in the myth and history of Naples.

The saying See Naples and Die became not only the title for one of his most seminal books but also his living experience: he not only saw Naples but more importantly, he lived it, loved it, felt it, experienced it, fought it and now rests in it.

The city that he so desperately loved has not gone from his world (and never will), and instead there is nothing left but the unending fascination with both infinity and beauty, both fears and controversy, which Naples symbolises.

Ditto chisto, Tom, you have chosen for yourself a wonderful eternal life. For this, too, we shall never cease to admire you.

The Italian Resistance. Fascists, Guerrillas and the Allies (Pluto Press, 2009)

Defiance: The Untold Story of One Man Who Stood Up To The Sicilian Mafia (I.B. Tauris, 2008)

‘Putting spanners in the works: the politics of the 99 Posse’ (article in Popular Music and Society, 2007).

Allende, Berlinguer, Pinochet… and Dario Fo’ (chapter in A. Cento Bull & A. Giorgio, eds.) Speaking Out and Silencing: Culture, Society and Politics in Italy in the 1970s (Maney/Legenda, 2006).

‘An interview with Fausto Bertinotti’, in International Socialism n.102, Spring 2004.

‘Nothing can be the same again’ in International Socialism n.92, Autumn 2001.

‘Dario Fo, the Commune, and the Battle for the Palazzina Liberty’, in New Theatre Quarterly, vol. xvii, part 2, May 2001.

Carmen Casaliggi is Lecturer in English at the University of Wales Institute, Cardiff. 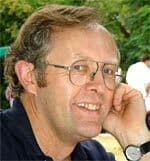 Tom Behan in his own words