We condemn the disgraceful homophobic comments in the Daily Star, Daily Mail and Daily Express which attack the recent Supreme Court decision to prevent the deportation of two gay asylum seekers back to Iran and Cameroon.

The Express front page on 8th June headlined “Now asylum if You’re Gay: they must be free to go to Kylie concerts and drink multi-coloured cocktails, says judge”. The Daily Mail asked “What planet is he on?” and called his decision to give home to gay asylum seekers “infantile”. The Daily Star carried an editorial titled ‘No room for gays’ which claimed “opening the floodgates to gay asylum seekers is absolute madness.” (see links to articles below)

The reality is very different. Homosexuality is still illegal in over 80 countries world wide. LGBT people seeking asylum in the UK are often fleeing attempted murder, serious assault or rape. Only this month a young gay man has been sentenced to death in Iran. In 2003 a gay Iranian man who had been refused asylum in the UK poured petrol over his body and set light to himself in the offices of Refugee Action in Manchester rather than go back to Iran.

Stonewall’s recent report “No Going Back” reveals that only 1 in 50 people who claim asylum on the basis of their sexual orientation is admitted to the UK with applicants frequently being told by the UK authorities that they can avoid attacks by being “discreet” in their country of origin – that is, by lying about their sexuality for the rest of their life. Abbey Kiwanuka from Uganda where there are moves to introduce the death penalty for homosexuality, said: “This (recent decision) gives me hope …..I feared for my life in Uganda. Just two weeks ago a gay man was beheaded. I lost my appeal because the court said I should go back and live a discreet life. I can’t do that. It’s impossible to do. ” The only motivation in these tabloid articles is to whip up hatred and division. They want to weaken our support for persecuted people and use asylum seekers and LGBT people as scapegoats to divert attention from an economic crisis we did not create. This is designed to undermine opposition to the cuts which their rich friends want to force on us. It also risks intensifying homophobia in Britain at a time when reports have shown an increase in reported homophobic attacks of up to 63%. The brutal murder of Ian Baynham in central London last Autumn is a terrible and tragic reminder of where this can lead.

We remember Jan Moir’s homophobic article in the Daily Mail following Stephen Gately’s death in which she claimed “Whatever the cause of death is, it is not, by any yardstick, a natural one” and questioned civil partnerships. Despite a record 22,000 complaints, including one made by Gately’s former partner, the Press Complaints Commission found no case to answer. This cannot be allowed to happen again. We demand an apology and retraction of the vile views published in The Daily Star, Daily Express and Daily Mail and that they publish the truth about the persecution which LGBT refugees and asylum seekers face in their home countries, and about homophobia here in Britain. We urge you to write to the papers’ editors, post comments online and register a complaint with the Press Complaints Commission. We also support calls for a protest outside the tabloids offices – date to be confirmed.

Stonewall Report No going back: Lesbian and gay people and the asylum system (2010): http://www.stonewall.org.uk/what_we_do/research_and_policy/2874.asp 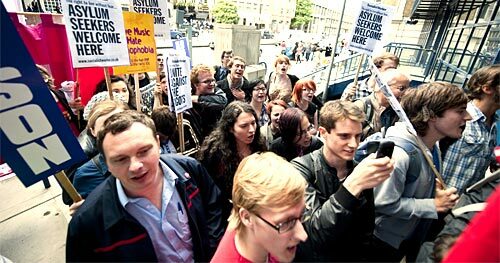 Protesters challenge attacks on LGBT asylum seekers in the Express