This article is over 15 years, 10 months old
Cuban cinema first came into its own after the 1959 revolution with the creation of the Cuban film institute, ICAIC. The British Film Institute has put together a selection of ICAIC films which is currently touring the country.
By Kelly Hilditch
Downloading PDF. Please wait...
Saturday 04 March 2006

Cuban cinema first came into its own after the 1959 revolution with the creation of the Cuban film institute, ICAIC. The British Film Institute has put together a selection of ICAIC films which is currently touring the country.

This tour includes work by Tomas Gutierrez Alea, the documentarist Santiago Alvarez, and Julio Garcia Espinosa, who in 1968 wrote his manifesto, For An Imperfect Cinema. In it he argued that the imperfections of a “cinema of urgency” – which sought to create a dialogue with its audience – were preferable to the sheen of high production values which merely reflected the audience back onto itself.

The ICAIC’s output in the 1970s included experimental films by black directors such as Sara Gomez and Sergio Giral which dealt with machismo and the history of slavery.

The 1980s saw a change in direction, with many films attempting to deal with the contradictions between socialist ideals and the reality of life in Cuba.

Of this period the film Plaff o Demasiado Miedo a la Vida (Too Much Fear of Life) is probably the best known. Director Juan Carlos Tabio takes the opportunity to lampoon everything from state bureaucracy, attitudes to race, sex and the family through to the pretensions of film-making.

It is also worth looking out for the mid 1990s film Fresa y Chocolate (Strawberry and Chocolate) in which a young Communist university student is picked up in an ice cream parlour by a gay photographer for a bet. What follows is a beautiful drama that demands tolerance.

Of the more recent films included in the tour, Lista de Espera (The Waiting List), also directed by Tabio, is a social comedy with echoes of the playwright Samuel Beckett. It sees a group of travellers, who, unable to leave a provincial bus station for lack of buses, spend their time doing it up instead. 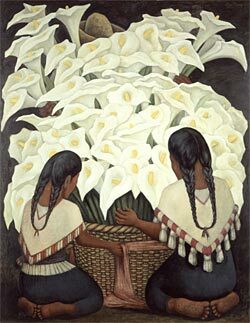 Rivera and Kahlo: the power, insight and sadness of art radicals