This article is over 14 years, 8 months old
A new collection of rare and previously unreleased recordings by Aretha Franklin are a powerful reminder of how she transformed popular music, writes Yuri Prasad
Downloading PDF. Please wait...
Tuesday 04 December 2007

In 1967, at the high point of the civil rights movement in the US, Ebony magazine proclaimed, “This is the summer of ’Retha, Rap, and Revolt”.

’Retha referred to Aretha Franklin, Rap referred to Black Panther leader H Rap Brown, and the revolt was a reference to the wave of riots that were sweeping America’s inner cities.

From seemingly out of nowhere Aretha had become the hottest name in soul music, one whose songs and singing style spoke directly to the burgeoning movements for liberation.

Even if privately she was shy and withdrawn, on stage and on record Aretha was their very emblem – a young, strong and confident Black woman.

Yet it had not always been so. In 1960, at the age of 18, Aretha had signed to the Columbia label with a reputation as gospel singer who was now “ready to go secular”.

While there she was put in an artistic straight jacket, recording regular ballads and some jazz standards. A few hits followed, but the music world was heading in a very different direction and Aretha was sidelined.

Everything changed when she signed to Atlantic Records at the end of 1966.

There she sat at a piano, surrounded by a group of white studio musicians and studio staff, and belted out I Never Loved A Man (The Way I Love You) – one of the most momentous takes in the history of black music.

The decision to take Aretha to the South was an attempt to capture the “natural sound” that was coming out of record labels like Stax, in Memphis – a sound that made better use of Aretha’s gospel training and her amazing vocal range.

The Southern studios, with their reputation for producing an “authentic” form of soul music, in which musicians and singers were granted a lot of artistic prerogative, were establishing themselves as a rival to the dominance of Detroit’s Motown.

You can hear the results on the early demos on this two CD album – I Never Loved A Man and Dr Feelgood.

The new freedom Aretha was enjoying allowed her to be true to her own style, as well as her emotions. You can hear it when you listen to her voice soaring in her version of You’re All I Need To Get By, or the B-side, Pledging My Love.

Aretha’s years of singing gospel, where the spirit of the music can take the singer on any number of improvised exaltations, where now put to work in some of the most emotional and believable soul records ever recorded.

And even as she sang lyrics that were typically submissive – like You Make Me Feel Like A Natural Woman – Aretha could turn the song into one that places her own emotional and sexual needs as central, making it an anthem for liberation.

Aretha’s importance was understood well beyond the US.

In the sleeve notes of the album Wexler writes that Paul McCartney sent him a demo version of the Beatles song Let It Be, saying he had written the song for Aretha, and asking her to record it – Aretha was initially unkeen, saying that as she couldn’t relate to the lyrics she couldn’t sing it.

She did, however, record an intriguing version of Lennon and McCartney’s The Fool On The Hill, which is present on the album.

The second CD in this album takes us through the early 1970s, by which time Aretha’s “Queen of Soul” crown was beyond doubt.

Yet many of the songs are distinctly less optimistic than those of the sixties, and many, like Can You Ever Love Again? deal with irrevocable break up.

It is tempting to see Aretha’s work through the lens of her own life stories – being on the receiving end of domestic violence, manipulation and heartbreak – but the songs of the later period are more than that.

As with much soul music, tales of relationship break-ups can also be read as commentaries on a society that repeatedly offers dreams of freedom and equality – but one which cheats and lies.

They reflect the bleak feeling in Black America in the wake of the assassination of Martin Luther King, the jailing of many leaders of the Black Panther Party and the increasing ghettoisation that accompanied the economic recession of the mid-1970s.

Between the years 1967 and 1973 Aretha Franklin was making some the most vital and innovative music of the age.

Even if you have most of her other recordings, this album is a must.

Life of the Struggle 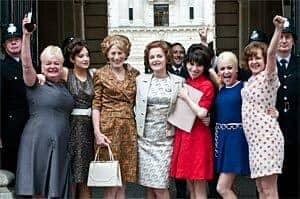