He systematically exposes how drug companies rig clinical trials, suppress evidence that their remedies may be ineffective or dangerous, nobble regulators and hype their wares through marketing, bribery and even fake medical journals.

“For several of the most important and enduring problems in medicine, we have no idea what the best treatment is, because it’s not in anyone’s financial interest to conduct any trials at all,” he grimly concludes.

The sheer scale of the fraud Goldacre uncovers is staggering. He scrupulously lays out the evidence that scientific malpractice is endemic and central to every aspect of its operation.

Goldacre takes pains to explain the often bewildering mechanisms through which new drugs are designed, tested and disseminated.

But he is also a campaigner. The book ends with a series of proposals for how the drugs industry could be regulated to prevent these abuses.

These include obliging drugs companies to disclose all the results of every clinical trial they have ever conducted, enforcing stringent standards on all future trials, and clamping down on deceitful practices such as paying academics to endorse ghost-written papers.

Goldacre’s politics are impeccably liberal and he insists his aim is to fix the drugs industry. But he does not shy away from taking on big business. And he is careful to apply the same scientific rigour to his own work that he demands from others.

Unfortunately the chances of politicians taking up any of his eminently reasonable proposals are slim, to put it mildly.

The problems of the pharma industry are the problems of capitalism itself. This is not a conclusion that Goldacre draws himself, but it is one that this brave and lucid book points to.

Bad Pharma by Ben Goldacre is published by Fourth Estate, £13.99

Six Feet Under: humour from beyond the grave 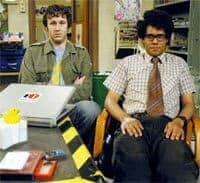