Beyond Caring – ‘To the boss, a cleaner is no more than a sturdy broom’ 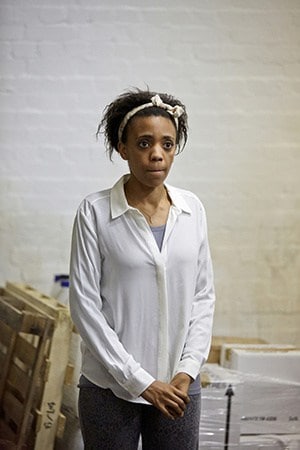 Beyond Caring tells the stories of people working on zero-hour contracts by stripping back theatrical convention.

This gets to the reality of their situation and displays the relationship between the boss and workers without any sugar-coating.

Director Alexander Zeldin told Socialist Worker, “We present the play with no lights, no dramatic convention or structure. We’re trying to break that down.”

Alexander argued that over-produced conventional plays “are another form of distraction. We’re trying to work in another way, have a different sort of approach.

“You have to take away certain things in order to see what is essential.”

This different sort of approach includes staging performances in unconventional settings. For instance, in Sheffield the play will be performed in a disused branch of Woolworths.

Both Alexander and Janet Etuk, who plays worker Grace, are at pains to point out that Beyond Caring was not intended to be a political play.

“Alex came up with an idea”, explained Janet. “We explored it, we did a few scenes and it became Beyond Caring. People labelled it political.”

Alexander said that the play is meant to be an honest representation of peoples’ lives and that this is what theatre should be about.

Alienation is a central theme.

Janet described how in rehearsals the cast would get into character by looking at the workers from the manager Ian’s perspective.

“It was extraordinary,” she said. “One of the things that Ian did was to relate the character Susan to a brush.

“She wasn’t a human, she was just good at her job. A really sturdy, brown brush—that’s what she is.

“Ian is very damaged himself and has his own story and his own fears. But you still see what he sees in people.

“You’re an object, your humanity is completely out the window in situations like this.”

The play describes the fundamentally unequal relationship between bosses and workers at the heart of capitalism.

The employment practices the play depicts are presented “completely factually”.

Both Janet and Alexander described the process of researching the play.

They met workers from the Unite union’s hotel workers’ branch to talk about their jobs.

“Theatre has to be that or what’s the point of it?” asked Alexander. “It can’t just be entertainment for some. It can’t be in the clouds. It has to be concrete.

“The Czech author Franz Kafka said that fairy tales have to be rooted in reality in order to go into the imaginary. It’s the same with the theatre.”

Alexander is frustrated that too many plays are completely disconnected from ordinary people’s experiences.

“When I go and see theatre like that, I’m like ‘give me a break, look at what’s going on outside.’ How can you justify doing this?”

“One of the biggest questions we’re confronted with is how to be positive in the face of what feels like hopelessness.”