This novel is a fictionalised account of the witch trials that took place in Essex between 1645 and 1647. They resulted in the execution of between 100 and 300 mainly old, poor women. The story is told from the perspective of one of the accused, nineteen year old Rebecca West. It is punctuated with excerpts from the trial itself, a constant reminder that it was real women who were tortured and judicially murdered.

The novel has rightly won glowing reviews and has provoked a discussion about the relevance of historic witch hunting for today, when women are publicly protesting against the violence they face. The pervading sense of a community destablised and riven with insecurities depicted in Manningtree Witches resonates with today’s readers. The drive for profit and order has always depended on scapegoating and persecuting the outsider.

From its first pages, The Manningtree Witches exudes a sense of menace. The reader is privileged, or discomfited, by a sense of how casual jokes, gossip and trivial arguments have the potential to damn women in the eyes of future accusers. Women alone, widowed or with husbands away fighting in the Civil War, present a threat to social order and male authority. “When women think alone, they think evil”, the witch finder tells Rebecca.

The novel dramatises brilliantly how the civil war created social tensions, breeding suspicions among previously amicable neighbours. It also tells how political tensions combined with famine to create a strain on community bonds. The elderly widow who relies on her neighbours for survival becomes an unwanted burden, and is transformed by their guilt into a perceived threat. Diverse fears coalesce around the character of Matthew Hopkins. Recently arrived in Manningtree, Hopkins is burying his own sense of weakness and failure beneath a desire to play God and to punish unruly women. He believes himself to be the servant of God, but it is he who brings evil to Manningtree.

A.K. Blakemore is a poet and their use of language gives a lyrical quality to descriptions of landscapes, weather and the sea. The poetic and stirring quality of the language coexists with an intense physicality in which all senses are brought into play. Women’s bodies are central to the narrative, “in all their fleshy actualness”. Women piss and drink and starve and stink and suffer. Women age, their skin sags and droops, their hair grows thin on their heads and thick on their chins. They outlive their usefulness. Their imperfect bodies become the evidence which condemns them as witches, their blotches and blemishes taken as marks of the devil. At their executions, their bodies betray them again, having become so thin and light that the women take too long to hang and their suffering is prolonged.

Blakemore is not the first writer to explore the political and social relevance of the witch trials. Arthur Miller’s The Crucible was an excoriating demolition of McCarthyism, explored through a dramatisation of the Salem Witch Trials. Blakemore’s novel breaks new ground by placing violence against women at the centre of the story. It is surprising that this is the first major novel to focus on women’s experience, given the scale of the witch hunts. They saw tens of thousands of people—around 90 percent of whom were women—imprisoned, tortured and executed across Europe in the late sixteen and early seventeenth centuries.

For decades, these events were the stuff of folklore and horror movies, while serious historical studies focused on religious conflicts and “mass hysteria” as motivations for the judicial murder of thousands of women. More recently, Marxist feminist historians have begun to place the witch trials at the centre of accounts of early capital accumulation. Silvia Federici argues convincingly that witch hunts were not a relic of medieval superstition, which was gradually superseded by Enlightenment rationalism. Rather, they were a product of modernisation, being rooted in the disintegration of the peasant community, already suffering from the enclosure of the land, punitive taxation and incarceration in workhouses.

Witch hunting destroyed a universe of practices and beliefs whose existence was incompatible with capitalist work discipline and weakened women’s capacity to resist the reorganisation of social reproduction along capitalist lines. The women of Manningtree seek out the ancient Elizabeth Clarke for potions and charms to help them attract a husband or conceive a child. Like many older, poor but experienced women, Clarke is a contradictory figure. She is both respected and despised, both powerful and dependent.

The women at the centre of the story refuse, or are unable, to conform to ideas of female respectability. Their hair is not tucked neatly into modest caps. Their homes are dirty. They drink, gossip and mock the pretension of men. “Witch”, Rebecca’s mother tells her, “is just their nasty word for anyone who makes things happen, who moves the story along”. Women who not passively submit are dangerous to the class and gender hierarchies of rural society.

Witch hunts took flight during years which saw popular revolts, epidemics and war. In the mid sixteenth century, treatise on witchcraft began to multiply across Europe. After 1550, there were laws and ordinances legalising the persecution of witches and making witchcraft a capital offence. In The Manningtree Witches, the women’s accusers are Puritans, but across Europe both the Catholic Church and its Inquisition and Protestant nations, countries who were at war with each other, united in their persecution of witches.

In Manningtree, Minister Long explains to his congregation that the Devil incites his servants to mutiny against the town, against Parliament and against England itself. People desperately seek proof they will be among the elect on judgement day. If success is a sign of God’s pleasure, then failure could be a sign of damnation if it cannot be blamed on Satan. Dreary domestic misfortunes—butter gone bad, a sick child, a failed crop—are transformed into signs of a heroic battle between good and evil. Female transgression also has a political dimension. “As moon is to sun, as woman is to man”, asserts Hopkins. But the Manningtree women are not subservient and meek. They are proud and fierce as well as vulnerable and desirable, and they share secrets and experiences that men cannot know.

Why do villagers accuse their neighbours of witchcraft? “No-one actually wishes to see a woman hung, her skirts soaking with piss and throat’s blood frothing on sackcloth. It is a horrible thing. Not amusing anymore. Or do they?”, Rebecca wonders. The villagers’ worlds have been wrung out of shape by the red hands of war and hunger. Hate, desire, hunger are powerful feelings while boredom and isolation make some susceptible to the excitement of drama and attention. And some men, shaped by the toxic masculinity required by a hierarchical and militarised society, want to assert their power over women who threaten their fragile sense of power. The women learn, if they did not know already, that men will not rescue them.

Witch hunting reached its peak between 1580 and 1630 when feudalism was giving way to the institutions of mercantile capitalism. The mechanism of persecution was not spontaneous but required official administration and organisation. Mathew Hopkins needs the authority of men of influence, local landowners, magistrates, prisons and courts to facilitate his persecution of women. And once the witch hunt is underway, arguments and grievances assume the moral authority of the church and the state. Revenge is taken, scores settled and money was made—all by the discovery of witches.

The Manningtree Witches inhabit a world in which centuries of custom and tradition are being violently ruptured by revolution and civil war. It is a world in which social reproduction is being restructured and women disciplined and disempowered. Witch hunting was not the only response to this crisis. In urban centres like London, women played an active role in the English Revolution, petitioning parliament and organising for wider participatory democracy. Katherine Chidley and Elizabeth Lilburne were respected activists in the Leveller Movement. In rural Essex, however, women were not able to organise collectively for social change. They were the victims of crises which exacerbated prejudices and ambitions and over which they had no control. This brilliant novel is a great read and an important reminder that capitalism came into existence dripping with blood from every pore. Some of that blood belonged to thousands of poor, marginalised women who were accused of witchcraft and murdered by the state. 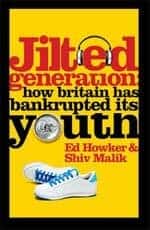 Jilted Generation: How Britain has Bankrupted its Youth 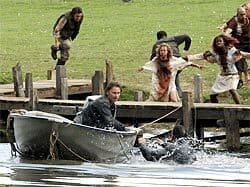 28 Weeks Later: better meet a zombie than the US Marine corps