This article is over 8 years, 10 months old
New versions of three of Brecht’s most famous works—Mother Courage, Life of Galileo and The Threepenny Opera—will be performed in London, Salford and Stratford during February and March.
By Christine Lewis
Downloading PDF. Please wait...
Tuesday 19 February 2013

New versions of three of Brecht’s most famous works—Mother Courage, Life of Galileo and The Threepenny Opera—will be performed in London, Salford and Stratford during February and March.

The German Marxist playwright and poet created these productions from the 1930s onwards. They were experimental, collaborative and fun. That’s why his work is still staged so often.

He argued that theatre ordinarily manipulated and put the audience to sleep when they needed to be critical observers.

He wanted to make audiences ask questions that couldn’t be resolved in the theatre. Then they would have to act in the world.

In Mother Courage and Her Children the audience needs to question the characters’ motives and even their names.

Actors break out of character and address the audience directly. They also speak stage directions.

In A Life of Galileo the audience is reminded that the world changes and they should too.

“In a modest house in Padua/As Galileo set out to prove/That the sun is fixed /And the earth is on the move.”

Brecht wrote The Threepenny Opera with fellow anti-fascist Kurt Weill. Its Ballad of Mack the Knife has made its anti-hero Macheath famous.

As he is about to be executed Macheath asks, “Who is the greater criminal—he who robs a bank or he who founds one?”

This production will be accompanied by free performances of the Mahagonny Songspiel, a sequence of songs that later inspired his opera, The Rise and Fall of the City of Mahagonny.

A Life of Galileo Until 30 March, Swan Theatre, Stratford-Upon-Avon www.rsc.org.uk 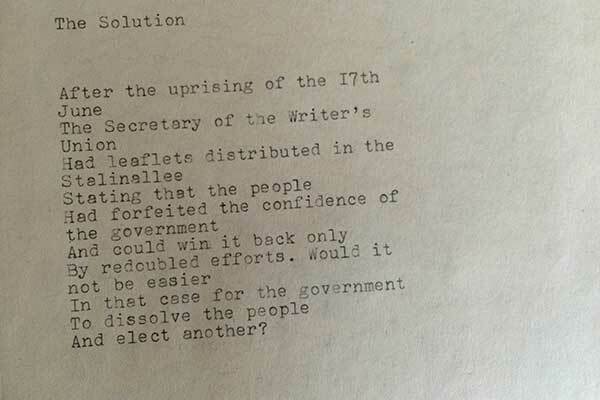