This article is over 20 years, 7 months old
GENOVA LIBERA is a new video on the marvellous demonstrations at the G8 summit in Genoa in Italy in July. Two readers explain why it is a must-buy. You can get the video from Globalise Resistance on 020 8980 3005, or via Bookmarks bookshop in Lo
Downloading PDF. Please wait...
Saturday 13 October 2001

PARTICIPATING in the demonstrations in Genoa was for many a life-changing event. We saw Italian trade unionists join the diversity of the anti-capitalist movement in the biggest demo Europe had seen for many years. We knew another world was possible, and we came home and tried to tell as many people as possible.

The new Genoa video is a powerful reminder for those of us lucky enough to have been there-and gives a brilliant sense of what it was like to those who weren’t. It records the utter brutality of the police and the Italian state, the death of Carlo Giuliani, and the vicious police attack on a school where protesters were sleeping. But the real message of the video is that we won, and that the events of Genoa marked a huge step forward for our movement-three days of action culminating in the march of 300,000.

What made Genoa so special? The video reminded me of how friendly the Genoese and Italian people were, of the huge colour and diversity of the demos. It reminded me of the way everyone helped and protected each other, however scary it got, and, most of all, of the solidarity, exhilaration and sheer joy we experienced during that final massive demo. It gives you the whole picture. You see the first day’s action-80,000 marching in support of immigrants and asylum seekers-as well as the huge protests throughout Italy over the attack on the school. And of course you see everything in between, including lots of useful facts and figures.

Don’t miss this opportunity to build our movement. Show this video at your college or workplace. Organise a public showing with your Globalise Resistance or other group. It won’t just convince people that they need to be on the next demo. It will generate discussions about the role of the police, about the tactics anti-capitalists should use, and about the future of the movement.

Bring Genoa back to life with this video, and let’s put that energy into building an anti-war, anti-capitalist movement that will frighten Bush and Blair to death.
Gareth Beniston, student nurse, London

Wishing I was there

I WASN’T in Genoa, but I watched the video at the recent Globalise Resistance conference. It certainly made me wish that I had been there. It made me feel really hopeful.

Despite all the intimidation and the murder of the young protester, you see 300,000 people on the streets fighting for a better world. There were so many groups and trade unionists there, all united and fighting together to change things.

Everyone should get this video and use it in your group. You just couldn’t feel cynical about trying to change the world after you’ve watched this video.
Leona Vigille, London

A cultural encounter between East and West 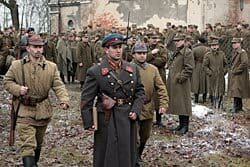 Katyn: a painful reminder of the depths of Stalinist terror