Enemies: capturing the spirit of the 1905 Russian Revolution

This article is over 16 years, 0 months old
Whatever your feelings about Maxim Gorky, Enemies is a play that seems to capture the possibilities when society is on the edge of change.
By Kelly Hilditch
Downloading PDF. Please wait...
Tuesday 23 May 2006

Whatever your feelings about Maxim Gorky, Enemies is a play that seems to capture the possibilities when society is on the edge of change.

The Almeida has brought together an impressive group for this production.

The translation by David Hare is spot on – which helps make the play as relevant today as it was 100 years ago.

The play depicts a Russian factory in 1905. The first laugh of the evening comes as the boss, Mikhail, denounces the militancy of his workers.

He says, “You know we could learn a lot from the English.

“They follow the law like ponies doing dressage. The act of obedience gives them a sort of sensual pleasure.”

There are many themes in this play, but unlike some of Gorky’s other works the story is held together by a central issue – class.

The owner of the factory, Zakhar Bardin, is portrayed as a soft liberal.

He gives lectures to the workers at the factory and spends much of the first act of the play saying that he “understands” the working man.

But when the workers threaten to close down the factory unless a bullying and violent manager is sacked, defending the existing order becomes paramount for Bardin.

The bosses organise a lockout, saying, “A little starvation will soon get them back to work.”

This really is a fantastic play. Productions such as this are often either good politically or theatrically – this manages to be both.

It gives a real sense of the spirit and excitement of Russia during the revolution of 1905. 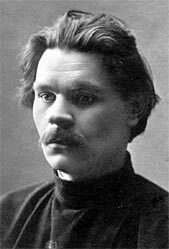 Maxim Gorky: a playwright bitter about the state of society