This article is over 13 years, 4 months old
Picasso’s Guernica, one of the most powerful indictments of the barbarity of war, has come to London this month. The timing could not be better, says Andy Ridley
Downloading PDF. Please wait...
Tuesday 07 April 2009

The horror of the aerial bombardment of Guernica, in Spain, by fascist forces on 26 April 1937 drove Pablo Picasso to his canvas.

The painting he created in response to the event has since come to define the brutality of war.

It is one of the greatest anti-war paintings ever produced.

The German air force used their bombing of Spanish cities to perfect techniques that would later be used in the Second World War.

Picasso’s Guernica was first exhibited at the Whitechapel Gallery in January 1939. The exhibition’s success revealed the well of solidarity among workers in Britain for the Spanish people’s fight against fascism.

Hundreds of working men’s boots were also donated to those fighting on the Spanish front after Picasso had said that they should be the cost of entry.

A new exhibition by the London-based Polish artist Goshka Macuga at the reopened Whitechapel Art Gallery in London, which showcases Guernica’s continuing relevance, has begun.

Picasso’s depiction of the horror of war was a long time in the making. He made many preparatory sketches to find the composition he wanted. It was well worth the wait.

Picasso was an artistic magpie. He devoured and incorporated into his art everything that caught his eye. This is evident in Guernica. There are traces of the great Spanish artist Goya, the South American muralists, African sculpture and more.

The final work is the culmination of a number of artistic threads – Picasso’s earlier work, the artistic traditions he drew from, and the new currents he was instrumental in developing.

But Picasso didn’t just copy – he innovated. Guernica is his unique bridge between what he had learned with his collaborator Georges Braque 20 years earlier in his “cubist” paintings, and the developing Surrealist movement he looked to.

In Guernica, Picasso uses a cubist structure – with intersecting planes to define objects, figures and landscapes seen from multiple viewpoints.

He also utilises the irrational and nightmarish depictions that often feature in Surrealist work. The result is a horrific and fractured scene of violence and pain.

The Guernica hanging at the Whitechapel is a full size reproduction made from cloth, which was made in collaboration with Picasso, and is on loan from the United Nations (UN) headquarters in New York.

The Whitechapel exhibition tells the story of how Guernica, and paintings like it, are received.

When you first enter the gallery it’s not clear why the tapestry is hanging in front of a plush velvet curtain and has a blue carpet leading to it.

What has that got to do with why the original painting was shown here in 1939?

And why is a circular conference table and chairs – with original articles and pamphlets from the Spanish Civil War under its glass top – placed in front of it?

It is then that you notice a bust of former US secretary of state Colin Powell. Guernica was deemed so powerful a work that authorities demanded it be covered up when Powell went to the UN in 2003 to make the case for the invasion of Iraq.

Macuga says, “The room has been designed with a real emphasis on accommodating and encouraging meetings for discussion groups, with Guernica used once again as a backdrop.

“You are therefore invited to host meetings and discussions around the central table. The space is offered free of charge.”

Surely we should take Macuga up on her offer.

Goshka Macuga: The Nature of the Beast (free) is on at the Whitechapel Art Gallery, 77-82 Whitechapel High Street, London E1 until 18 April. 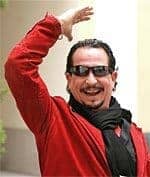