ALL THOSE who oppose the US war on Iraq should try to get to a performance of the play Pugilist Specialist. Performed by US theatre ensemble Riot Group, the play has just begun an extensive tour of Britain and Ireland.

Based in Oakland, California, the group is one of the most radical and sophisticated companies working in theatre today.

Ever since 1999, when they received a Fringe First award in Edinburgh for a satire of modern American society, they have been wooing audiences and critics with their combination of intelligent, radical writing and no holds barred performance.

In 2002 they picked up another clutch of awards for Victory at the Dirt Palace, a brilliant dark comedy about the US news media’s response to 9/11. The play saw rival news anchors, father and daughter James and K Mann, compete for ratings as the Twin Towers collapsed. Combining playwright and actor Adriano Shaplin’s own sharp poetics with lines from Shakespeare’s King Lear, the drama went down a storm when it toured Britain.

Their latest piece, Pugilist Specialist, is their most successful so far, playing to packed houses during last year’s Edinburgh Festival and winning the coveted First of the Firsts award for the best new show on the Fringe.

Telling the story of a US Marines assassination squad on a mission to kill an unspecified Arab enemy-codenamed “the bearded lady” by the military-it is a hilarious and powerfully political satire on Bush’s so called “war on terror”.

Inspired by the US mass media’s reporting of Osama Bin Laden and Saddam Hussein, 24 year old Shaplin has written a play about imperialism’s love/hate relationship with its enemies.

Many people have argued that, following the collapse of Stalinist “Communism”, the US and its allies needed a new enemy. Shaplin takes that idea to another level.

If the play’s take on the war goes way beyond mere sloganising, so too does its representation of the US military.

The four members of the “black operations” death squad are not one-dimensional bad guys. Each has their own, very different reasons for being in the military, and very distinct motivations for following their orders.

None of the characters, not even commanding officer Colonel Johns, has any serious control over the situation. The real military power is above them, and offstage.

The play brims with superb writing. The satirised letters to soldiers from American children are brilliantly observed, and rib-breakingly funny. Bomb expert Emma Freud’s opening speech, in which she explains that “punctuality is my feminism”, is an excellent taste of what is to come.

Pugilist Specialist is a breath of fresh air, not only politically, but also artistically.

It is common for left wing plays to treat their audience as if they are already signed up to the same political manifesto as the playwright.

Much of the drama that has been written in response to the “war on terror” has made this mistake, coming across more like a series of slogans than an imaginative response to events. The Riot Group stands in a better theatrical tradition.

Pugilist Specialist is at the Soho Theatre, London, until 7 February. It then tours across Ireland and Britain. For full details go to www.theriotgroup.com/news.html Mark Brown has a full interview with Riot Group playwright Adriano Shaplin in the current edition of Socialist Review magazine.

Newman is a wizard of popular songs. He has been crafting consistently good music and darkly comic political lyrics since the 1960s.

“Political Science” is a subversive song written in 1972 during the Vietnam War, but you can almost hear George Dubya singing:

“Boom goes London and boom Paree, More room for you and more room for me. And every city the whole world round, Will just be another American town. Oh how peaceful we will be, We’ll set everybody free.”

These days Newman concentrates most of his energy on film scores, winning an oscar for Toy Story. But last year he recorded classics from his 35-year career.

The result is a wonderful new CD, The Randy Newman Songbook Volume 1, with Newman singing solo accompanied by his lonely, quirky piano.

The CD also includes some fine new material like “The World Isn’t Fair”, a song about Karl Marx. My favourite is “The Great Nations of Europe”, a four-minute history of Western imperialism that will make you laugh your head off.

Try to catch Newman on his British tour and if you can’t get a ticket listen to his new CD.

More than a religious war 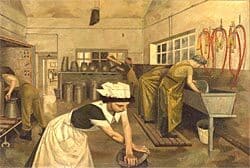 Evelyn Dunbar: recording the role of women during the war