This article is over 15 years, 4 months old
Yuri Prasad looks back at the life of the socialist cartoonist
Downloading PDF. Please wait...
Saturday 07 April 2007

A new exhibition of the work of Glaswegian-born Jimmy Friell has just opened in London. Friell was acknowledged, in the 1930s, as one of Fleet Street’s finest cartoonists, and under the pseudonym Gabriel, he put his humour and his brilliant drawing skills to work for the Communist Party newspaper, the Daily Worker.

Born to an extremely poor working class family, by the age of 18 Friell was already supporting a family of nine on his wages as a freelance humour artist and writer for Scottish newspapers.

The combination of the economic depression, the mass unemployment that accompanied it, and the growing threat of fascism in Europe led Friell to the Communist Party.

In 1935 he sent some of his work to the Daily Worker, guessing correctly that they would be the only newspaper radical enough to print it. Within a few months he was on the permanent staff of the paper that was regarded as serious and fully professional. Its appearance and contents were as up to date as any in Fleet Street.

Friell took the name Gabriel for his cartooning because, he said, “it looked like the last trumpet was being sounded for the existing society, so I took the pen name of Gabriel, the archangel, and settled down to helping the process along. My value lay in supplying the humour that the paper rather desperately needed.”

Friell’s cartoons were distinctive in that they often featured carefully drawn working people who voiced opinions that spoke for an entire class. He also drew brilliantly cruel caricatures of over-indulgent bosses.

After serving during the Second World War, Friell returned to the Daily Worker where he lampooned the Labour government for the slow pace of promised reforms. In one cartoon he responds to the growing arms budget by showing a council house that has been built to look like a tank.

A council official apologises to the new tenants, saying, “We’ve had to make a few amendments to the original design.”

During the build up the Suez Crisis and the invasion of Egypt, Friell laid into both Tory and Labour politicians who followed Britain’s imperialist aspirations.

He drew an excellent illustration depicting crowds outside parliament demanding a debate on the war – Big Ben towers above the crowds, but is gagged.

Then in 1956 came the shock of the Soviet invasion of Hungary. Friell, like many other Daily Worker journalists, sided with the uprising and had his work rejected.

“I couldn’t conceive of carrying on cartooning about the evils of capitalism,” he wrote, “and ignore the acknowledged evils of Russian communism.”

After leaving the Daily Worker Friell went on to work for the Evening Standard and elsewhere.

He still published cartoons into his 70s but regretted not having a regular outlet in which he could attack Margaret Thatcher, Ronald Reagan and Mikhail Gorbachev. “Not being able to say anything about the political situation in the last ten years is purgatory,” he remarked.

Friell died on 4 February 1997 just before Tony Blair was elected – which is a shame, because New Labour would surely have provided him with some excellent material.

Fallen Angel! The political cartoons of the Daily Worker cartoonist “Gabriel” is at the Political Cartoon Gallery, 32 Store Street, London WC1. The exhibition runs until 28 April.

Ray Charles: remembering the man who had music in his blood 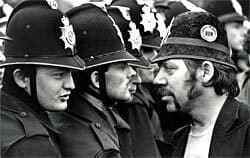