Joan Miro is marvellous at the Tate

Joan Miro is one of the supreme artists of the 20th century and the current exhibition of his work at the Tate Modern is a wonderful experience.

Miro was always politically engaged and committed. In 1924 he joined the Surrealist Movement along with Andre Breton, Max Ernst and Andre Masson. Their aim was to use images from the subconscious to undermine the dominant “common sense” bourgeois view of the world. In 1937, at the time of the Spanish Civil War, he exhibited The Reaper or Catalan Peasant in Revolt in the Pavilion of the Spanish Republic alongside Pablo Picasso’s Guernica and Alexander Calder’s mobile sculpture Memory Fountain.

At the same time he produced the blazing Still Life With Old Shoe [which he called “my Guernica”] and the campaign poster Aidez Espagne in support of the Republic. In 1973 he showed May 1968, a tribute to the French May events, and in 1974 he painted The Hope of a Condemned Man on the day of the execution by garrotte of the young Catalan anarchist, Salvador Puig Antich.

However, neither the greatness nor the politics of Miro’s art are properly captured by these external connections—both are drawn from a deeper well.

At bottom the driving force of Miro is his intense involvement with the basics of life, natural and human, in his native Catalonia—with the land, the sun, the sea, the sky, the stars, the night, the moon, the clouds and the people. Above all this was with the people of the land, the peasants. And it is a joyful abundant involvement which embraces humour, sexuality, love, romance, the cosmic and the microscopic.

All this finds expression in an eruption of colour, of vibrant reds, yellows, blues, oranges, greens, which evoke both a Mediterranean summer’s day, and a tropical parrot—and a carnival of surrealistic forms in which stars resemble starfish, birds are eyes or aeroplanes, and ants and algae are as important as mountains and galaxies.

In Miro even a painting which is predominantly black seems overwhelmingly joyful and bright—even a single black line or blob on a vast field of colour hops, skips and dances like a child at play or a kite swooping and soaring in the sky.

In one sense Miro is one of the simplest of modern artists and one of the easiest to enjoy. All that is required is to open up to the pleasures he offers. No effort of interpretation is needed. Interpretation is possible, of course, but it is not in the least necessary. Moreover this is the simplicity of an absolute master. His colour and his forms are drawn from a host of other artists, such as Picasso, Gauguin, Goya, Van Gogh, Arp, Tanguy, Matisse and others, and yet his palette and signature are unique and instantly recognisable.

The relationship between Miro’s sensuous delight and burgeoning creativity and his radical politics is both simple and profound. Just as Rembrandt’s deep humanity and Van Gogh’s passionate intensity clashed almost involuntarily with the profit driven calculations of capitalism, so too does Miro’s flow of joyful invention.

Of course, Miro’s positive passions exist in opposition to negatives. He is for the people, the peasants, life, nature, creativity, imagination, art. He is against poverty, oppression, hunger, war, dictatorship and fascism (especially General Franco). But rather than confronting and exploring the negatives—the horror, the alienation, the barbarism—as Goya did in his Disasters of War and Black Paintings, Miro’s art overwhelms the negative with positive creative energy. He even quotes Marx in his support:

“This is the negation of the negation that Marx spoke of. In negating the negation, we affirm. In the same way, my painting can be considered humorous and even light hearted, even though I am tragic.”

If by “light hearted” is meant not serious then it is a false characterisation of Miro’s work. But it certainly does lighten the heart, and we all need a bit of that from time to time.

Miro is on at the The Tate Modern in London until 11 September. Go to www.tate.org.uk

A Spy Among Friends

Will the Revolution be Televised? 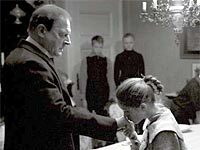 2009: a year of terrifying, satirical and fascinating art