This article is over 18 years, 9 months old
MRS EXECUTIONER Bush decided to give her husband a break from organising mass murder by having a nice poetry reading at the White House two weeks ago. Sadly for her, every single one of the poets she invited refused to attend in protest at Bush's war madness.
By Bob Light
Downloading PDF. Please wait...
Saturday 22 March 2003

MRS EXECUTIONER Bush decided to give her husband a break from organising mass murder by having a nice poetry reading at the White House two weeks ago. Sadly for her, every single one of the poets she invited refused to attend in protest at Bush’s war madness.

Meanwhile, George Michael has to be stopped from wearing his ‘No war-Blair out’ T-shirt on Top of the Pops. Award winners at the BAFTA beanfeast have to be threatened with pulled plugs if they use their speeches to attack the war (whereupon Saul Zaentz does just that).

Something is happening and you don’t know what it is, do you, Mrs Bush? Whatever happens in their obscene war, the fact is that Bush and Blair have created a mood of dissent and resistance in the world of the arts that we have not seen since Vietnam.

Last week Michelle Collins (of all people) signed the Mirror’s anti-war petition and said that she did not know ANYONE in ‘showbiz’ who supported Blair. Where once in his pomp he could summon fawning A-list celebrities to Number Ten, now Blair is reduced to hustling invitations to an MTV studio where an audience of young people tear him apart.

What is so exciting about this movement of opinion against war is that it has nothing to do with bandwagons. Above all else, it is founded on simple decency and even political intelligence. So Dustin Hoffman said in London a couple of weeks ago, ‘I believe that this war is about what most wars are about-hegemony, money, power and oil.’

That’s a profound truth that quite eludes gutless ranks of Labour Blairheads. My theory is that actors have been uniquely placed to see through the war propaganda of Bush and Blair. After all, actors pretend for a living, and they can spot a third rate liar when they see two. We can be proud of the fact that the stop the war movement has won the political argument so comprehensively that Blair has to rely on the intellectual pondlife of the Tory Party (oh, and the Observer’s Nick Cohen, of course).

We can likewise take pride in the fact that so much artistic talent is on our side. We’ve got REM, The Dixie Chicks, Harold Pinter, Spike Lee, Steve Earle, Susan Sarandon and Samuel L Jackson (and thousands more). Blair’s got Jim Davidson (and, er, Nick Cohen). But in the US there are ugly signs that a right wing backlash is gathering momentum.

Bush might come across as Forrest Gump without the brains, but as his record of approving more executions than any governor in US history shows, he is utterly vindictive. Bush will come to shove-we can be sure of that. US television is even more obsequiously conservative than the BBC.

And in the broadcasting sewers there is the network of talk radio ‘shock jocks’ like Rush Limbaugh who pour out their Rottweiler politics 24 hours a day. Already these Stupid White Men are baying for revenge on ‘Hollywood celebrities abusing their status’.

The first actor in their sights is Martin Sheen, who is being threatened by NBC with the sack from The West Wing for his role in opposing the war. Sean Penn is now reported to have been sacked from his new movie by producers keen to appease the Bush machine. Witch-hunts are a way of life in American right wing politics.

During the Vietnam War all of the movie actors who stood up to oppose the war saw their careers suffer. The most prominent anti-war campaigner, Jane Fonda, was slandered as ‘Hanoi Jane’ and barely worked for ten years. And that was nothing compared to the savagery of McCarthyism in the late 1940s and early 50s.

As the US slithered into the Cold War, the ruling class moved to nix all semblance of American radicalism. Their ultimate target was always the trade unions, but they first attacked high visibility radicals in Hollywood using the House Un-American Activities Committee (HUAC).

Anyone even thought to be left wing was subpoenaed, defamed and then blacklisted by the studio bosses if they refused to grass on their friends. Ten went to prison. Hundreds more were sacked and driven into exile.

A few committed suicide in a spiteful cull that lasted well into the 1960s. Recently one of the victims of that purge, screenwriter Bernie Gordon, now 83, summed up his bitter experience to forewarn the new generation of protesters: ‘I think the suppression of dissent which is what the HUAC was all about is one of the most shameful periods of American history. I think it’s very necessary for people in America to know that it’s happening again. I think what they’re doing in relation to non-citizens of Arab extraction is just as shameful. What we call McCarthyism, the whole anti-leftwing hysteria, was a way of saying that you have to conform to the ways of the people who run this country or you are an enemy.’ 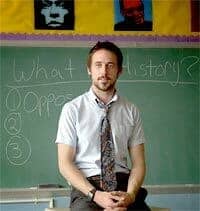 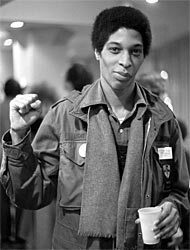 A new weapon in the fight to stop the war