Maid—domestic abuse and a support system designed to fail 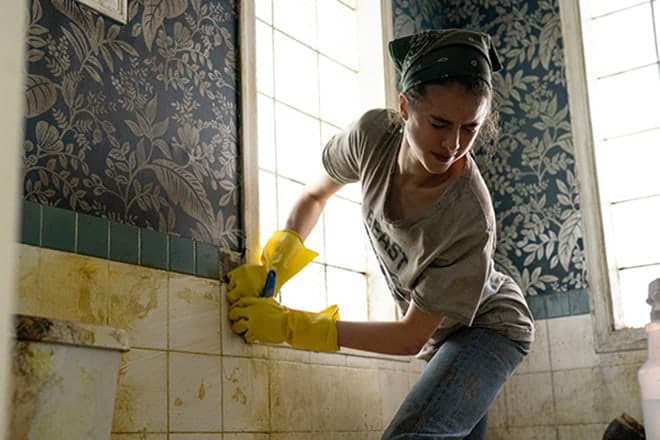 Alex has to take a job as a cleaner

Maid starts on a thrilling note—a young woman escapes a cabin with her daughter in the middle of the night. But this isn’t an easy getaway, and Alex, played by Margaret Qualley, doesn’t get very far for a long time indeed.

She’s fleeing abuse at the hands of her partner Sean. Bouncing between a domestic violence shelter, spare rooms, couches, and even a ferry terminal, she is desperate to leave Sean. But everything seems to conspire to bring her back.

To get away this, she takes a job as a maid, cleaning the houses of everyone from the superrich, to hoarders whose houses are libraries of teetering tat.

Alex’s life is hard. She’s caught between caring for three year old Maddy and her mother Paula, who is also a victim of domestic abuse.

And she’s constantly on the edge of complete destitution. An on-screen bank balance graphic decreases with every bottle of bleach she buys, and every trip to the petrol station.

Alex catches a few lucky breaks—but sympathetic individuals can only help her so much, and there is usually a catch.

It’s almost too trite to say, but Maid shows really well how individuals can slip through a system not designed to actually help people.

But this does stand up as a drama, not a worthy look at the poor state of the US social security system.

Qualley engages in every episode, and Nick Robinson’s Sean toes the perfect line between menacing and, at times, completely pathetic.

It’s easy to see why Maid has been so popular on Netflix.

It’s extremely good, and easily one of the best TV programmes of the year.

It’s pacy, darkly funny at points, and avoids the pitfalls of either dwelling on Alex’s suffering or portraying her as a superhero survivor.