Maidan: A snapshot of the forces that shaped Ukraine’s crisis

his documentary begins with a shot of a massive crowd gathered in a square. This is Maidan square in the Ukrainian capital Kiev at the peak of the movement against the government.

The square became an international symbol and was the scene of many battles with the police.

Ukrainian director Sergei Loznitsa’s film shows rather than tells. His style is rooted in the Russian avant garde tradition. There is no main narrator and the footage of events doesn’t cut to explanatory interviews.

So we are not told what the opening scene is. Later a credit says the crowd has gathered in support of closer ties with the European Union (EU).

But there is a glimpse of why the early protests inspired so many people and why they brought ordinary people onto the streets. Over the left anthem Bella Ciao a woman’s voice can be heard through the speakers, “Goodbye riot police… and venal judges.”

The film moves on to less inspiring but necessary activities in the makeshift headquarters, right down to the organisation of soup kitchens.

But there are also signs of the direction the movement was going in. This crowd begins to sing the Ukrainian national anthem.

Meanwhile, in the crowd, we can see a few blue flags with the yellow fist of the fascist Svoboda party.

This shows illusions in the EU and Ukrainian nationalism which would allow the right to come out on top.

Loznitsa’s style is refreshing, revealing much more than hacks reported at the time.

But it is also frustrating. He may be trying to give some agency back to the “crowd” as a collective. But the style can make the fascinating film difficult to follow. It makes it hard to discern political nuances. 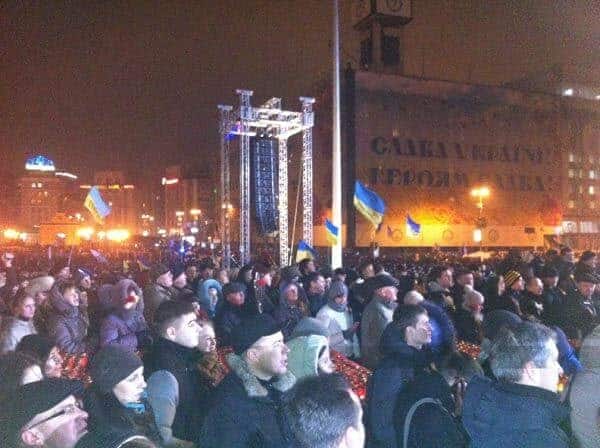