This article is over 1 years, 8 months old
Moffie tells the story of two gay conscripts in the brutal environment of the South African army. It’s an interesting take on a toxic society, says Nick Clark
Downloading PDF. Please wait...
Friday 01 May 2020

Moffie, a new film released to Curzon Home Cinema, is about two soldiers in apartheid South Africa struggling with their sexuality.

Nicholas and Dylan are teenage conscripts drafted to fight South Africa’s war on Angola in the 1980s. In a brutally repressive environment, the story focuses on the relationship the pair never quite manage to form.

From the moment Nicholas leaves for the army, he’s thrust into in an aggressive, macho, but homoerotic environment. He doesn’t exactly struggle—just bears it quietly for the most part. But on the inside he’s drowning.

There is of course the question of making a film about a white man’s suffering in a society defined by racism against black people.

“The subject matter did bother me at first,” he said. “Why make another film about white men in apartheid South Africa?”

His answer is partly convincing. “Under this regime, boys were sort of shamed into becoming a certain kind of man.

“Because we keep asking the question, especially in South Africa—where does our toxic masculinity come from? When I looked at it that way, when I sort of saw this as an exploration of our past that informs our present, I was more comfortable with it.”

So there are nods to the racism that pervaded apartheid society. Early on, a jeering train full of white army recruits threaten, taunt and humiliate a black man waiting at a station as officers watch on approvingly.

It does mean that none of the few black characters have much agency in this film. They are just silent objects who racism is done to. But maybe that’s the point.

It’s a suggestion that the toxic, hostile, culture in the military grows out of the racism at the heart of South African society.

Anything that challenges that is crushed. To be gay is almost as unacceptable as to be sympathetic with black Africans.

Nicholas and Dylan’s relationship is stamped out before it even has a chance to begin, leading to a somewhat unsettling—but powerful—ending. 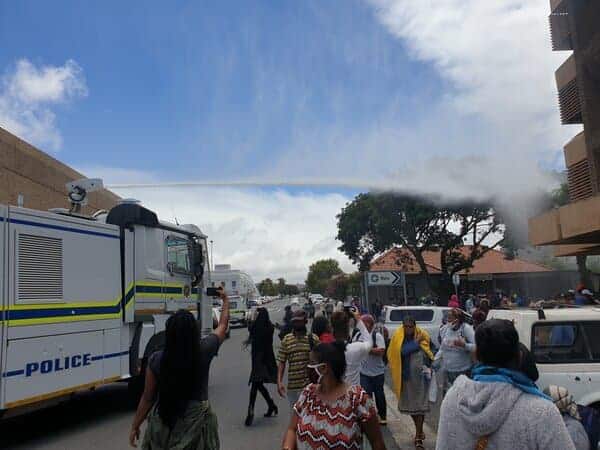