Moth Smoke: The underbelly of the jet set

This article is over 20 years, 10 months old
Moth Smoke, a new novel by Moshin Hamid, is set in the border city of Lahore, Pakistan, in 1998. Electricity is in short supply, temperatures are over 120 degrees and nuclear testing is a common occurrence.
By Naina Kent
Downloading PDF. Please wait...
Saturday 03 March 2001

Moth Smoke, a new novel by Moshin Hamid, is set in the border city of Lahore, Pakistan, in 1998. Electricity is in short supply, temperatures are over 120 degrees and nuclear testing is a common occurrence.

The novel exposes the underbelly of the young corrupt elite in Pakistan, whose wealth comes from drug trafficking, foreign bank accounts and gun-running. Daru, the central character, has been sacked by his bank and looks unlikely to get another job. He does not have a foreign degree and no bank or multinational will employ him without one.

His loss coincides with the return of Ozi, his childhood friend. Ozi, the son of a corrupt civil servant, throws a party for Lahore’s jet-set young rich, complete with ‘sushi flown in from Karachi’. Daru is desperate to fit in, but begins to realise he never will unless he has wealth behind him. His life gets increasingly out of control against the background of a crumbling economy and mounting right wing political pressure to have and use nuclear arms.

Pakistan has a foreign debt of $36 billion. Two thirds of its budget is geared to debt servicing and defence spending, while there are staggering levels of poverty. As one character puts it, ‘This nuclear race is no joke-poor people are in trouble.’

Moth Smoke is part of a new generation of writing that is different in style from Salman Rushdie’s magical realism. The language is brutally clear in style and it is a refreshing and insightful read. 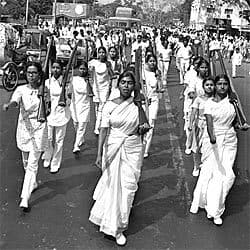 Bangladesh 1971: viewing war and resistance from below