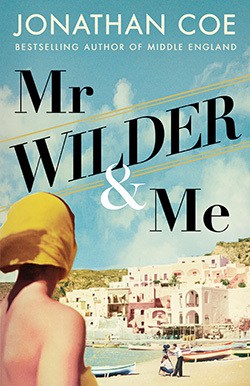 Mr Wilder and Me by Jonathan Coe

Jonathan Coe’s latest novel might be described as “life-affirming” but it is so much better than that makes it sound.

Mr Wilder & Me begins with a middle aged woman, Calista, dealing with worries about her daughters.

One daughter is emigrating to study, and Calista’s career in film scores is largely in the past—leaving her feeling that no one needs her.

At first it seems like a nicely-written novel about a fairly ordinary woman. We quickly learn that her life has been anything but ordinary.

Calista has a fascinating past, including a stint working with top Hollywood director Billy Wilder.

When the book delves back to this time, it reveals her as a much more complex character. And it shows how people experience similar troubles and anxieties, regardless of their position in the world.

Wilder is trying to make a film about an ageing actor who is past her best. It’s a metaphor for how he feels as a director.

He wants to make films that are “a little bit elegant, a little bit beautiful”. But the world has moved on and modern directors focus on misery and despair instead.

There is a very powerful scene where he talks about his painful search to discover what happened to his mother in the wake of the Nazi Holocaust. You get the sense that Wilder wants to produce films that provide an escape because his reality has been so grim.

Back in the present day, Calista figures out how best to deal with the issues in her life and her family.

For all her fears about being a has-been, she is still learning and going on to have new experiences.

Mr Wilder & Me is wonderfully written and I was sad when I finished it. Read it if you want to feel better about humanity.