Nothing good on at the cinema today? What rubbish!

This article is over 16 years, 5 months old
What a year 2006 is turning out to be for any socialist who wants to see politically charged or socially aware cinema.
By Stephen Philip
Downloading PDF. Please wait...
Saturday 25 February 2006

What a year 2006 is turning out to be for any socialist who wants to see politically charged or socially aware cinema.

The line up for this year’s best film Oscar and the recent releases from Europe are a testament to the film industry being in rude health in terms of intelligent and heartfelt work. This will surprise those sectarian Dave Spart types who believe post-1970s cinema in the US has suffered a great fall in artistic quality. They argue the 1970s was a period of commercial crisis and daring, bleak endings – a time when movies really mattered.

What’s not commercially daring (and sometimes bleak for Hollywood) about films such as Brokeback Mountain, Good Night, and Good Luck, Capote and Crash?

Jonathan Taplin, film professor and producer of Mean Streets and Under Fire, says of the current period, “Clearly the mid-1970s was one of those periods of authenticity. I think there’s some evidence that what’s happening now is similar.”

Grant Heslov, the co-screenwriter of Good Night, and Good Luck, also believes this year marks a return to the spirit of the 1970s. He says, “The films feel more personal with more independent thought.”

There are those on the left who initially tried to ignore the new crop of politically edged cinema, but as they emerged from their river of small shame called De Nial they had to confront the reality. A new tack was then adopted that these films were simply not radical enough. This “more Marxist than thou” position is one that unfortunately reveals more about the commentator than the films.

In the year of the British release of Michael Haneke’s Hidden, the Dardennes Brothers L’Enfant and more work from the Brecht-inspired Lars Von Triers, the notion that one could say that today’s European films are no longer tough, intelligent or emotional is simply baffling.

There was a time when left cinephiles explored popular cinema for what it illuminated about the times, but nowadays it’s assumed history no longer exists. For most of us working with good sense, this is a time to celebrate how the worldwide movement for political change has influenced film-makers to sneak in work under the radar of corporate US and Europe. 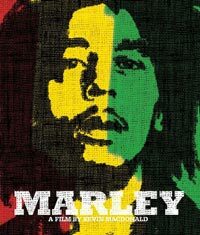 Marley's cry of rage against poverty still rings out today