NWA biopic tries to ‘keep it real’—but bottles the reality

Four years before one of the biggest riots in US history, hip hop group Niggaz Wit’ Attitude (NWA) knew that Los Angeles was ready to explode.

And they knew that Compton, one of its poorest and blackest suburbs, would be at the heart of it.

NWA’s 1988 album Straight Outta Compton captured the simmering rage at police harassment so accurately that everyone who heard it knew it.

The city finally blew in 1992 after four police officers, who had been

Fifty three people were killed in the six-day uprising, over two thousand injured and $1 billion worth of damage was done.

It took 4,500 US National Guard troops to finally put it down.

Gray pulls no punches when it comes to the cops. In the opening minutes there’s a drugs raid involving a police armoured vehicle smashing through a wooden shack, crushing all in its path.

But just like the group and their music, the film carries a contradiction at its core.

Gangsta Rap, as NWA’s genre became known, was about gritty realism and the pictures it painted were not pretty.

They’re stories of drug dealing and abuse mixed with those of prostitution and prisons. Hatred of the police is entwined with hatred of women and homosexuality.

At its best Gangsta Rap celebrated the defiance of the ghetto—resistance to the cops, poor people surviving against the odds, and creativity in the face of adversity.

But at its worst, it glamorised the vilest side of ghetto life—the way people can turn on each other.

Women were routinely described as “bitches” and “hoes” and pimping, raping and abusing them were acts to be celebrated.

The slaying of any rap or gang rival with automatic weapons was perhaps the second most popular theme.

How does the Straight Outta Compton film present the bad side of the contradiction?

Well, naked women gratuitously illustrate so many scenes it’s not worth counting.

But they are juxtaposed to saintly mothers and “real” girlfriends. However, when it comes to the most misogynistic lyrics and Dr Dre’s real-life acts of violence against women, suddenly Gray turns shy.

It seems he just can’t tell us the unpalatable truth. And, for a movie that is supposed to be “keeping it real”, that really sucks. 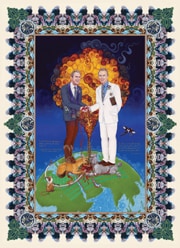 Book review: Bandit Capitalism: Carillion and the Corruption of the British State