Paul Nash: a life painting the bleak horror of war

This article is over 12 years, 5 months old
Paul Nash’s first oil painting, ironically titled We Are Making a New World, is a stark and eerie vision of a landscape ravaged by the First World War.
By Angela Stapleford
Downloading PDF. Please wait...
Tuesday 23 February 2010

Paul Nash’s first oil painting, ironically titled We Are Making a New World, is a stark and eerie vision of a landscape ravaged by the First World War.

Dead blasted trees and red skies form a nightmare image of the world the war was creating.

Painted in 1918, it is one of the most striking works in a new exhibition featuring paintings, drawings and photographs from Nash’s life.

He experienced the trenches as a soldier and after being wounded he exhibited paintings based on his sketches made on the Western Front.

He returned to the front as an official war artist for the War Propaganda Bureau.

Despite his official status he saw himself as “a messenger who will bring back word from the men who are fighting to those who want the war to go on for ever.

“It will have a bitter truth and may it burn their lousy souls.”

Nash was a Modernist and an influential artist.

Some Modernist movements, like the Italian Futurists, celebrated war and focussed on the machine as dynamic and progressive.

But Nash’s war paintings are bleak and harsh and often connected to natural forces and the elements.

Nash remained deeply affected by his wartime experiences. His work continued to show the enduring bitter truth of war.

Even when he moved to paint landscapes, the melancholic quality of death and mourning remained.

His Friends in the South

Breaking All the Rules 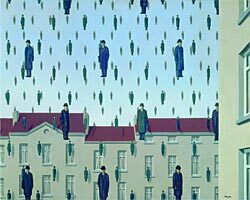