They say that the devil has all the best tunes. It seems the left has the best playwrights.

Bertolt Brecht, Arthur Miller, Harold Pinter, the list goes on of socialist dramatists who have created resonating, complex stage works which defy the idea of left-wing writers as creators of one-dimensional polemics.

Add US writer Adriano Shaplin to the list. The playwright and his company, the Riot Group, have created all kinds of intelligent, satirical mayhem with plays such as Wreck the Airline Barrier and Pugilist Specialist.

Their latest piece, Switch Triptych, moves their art in another, deeply satisfying, direction.

Set in a New York telephone exchange in 1919, with automatic switching machines, redundancies, and prohibition just around the corner, it is a brilliant play about the complex mixture of class, “race”, religion and nationality which made the modern US.

Shaplin has written and directed the piece to have a disquieting, unfamiliar aspect.

The drama revolves around the character of Lucille Guzzino, an Italian-American “hello girl” who effectively runs the exchange on account of the network of payments she has set up with companies which she puts first in line for business calls.

Resentful of the anti-Italian, anti-Catholic xenophobia she and her community have suffered, she turns to a combination of church, corruption and drink which would be bizarre were it not rendered so plausible by Stephanie Viola’s breathtakingly sharp performance.

Meanwhile the invisible bosses of the Bell Atlantic telephone company are plotting the wipeout of the all-woman workforce and their replacement with machines which automatically connect calls.

Protestant puritanism and a newly-arrived trade unionism vie for the hearts and minds of the workers.

The portrayal of each of the characters in this five-actor play is deeply ambiguous. We see people, places and ideas, not as they are, but as other characters see them.

To the English trade unionist, New York is a muck heap of unregulated capitalism with no real prospect of solidarity. To Lucille, trade unionism is a foreign, un-Catholic imposition, and a threat to her business.

The real threat to her livelihood, of course, is the bosses, but they remain off-stage. 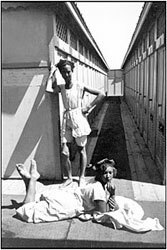