Robert Golden documents working class communities with streams of pictures that beautifully home in on moments of everyday life.

Bridport Arts Centre in Dorset is hosting an exhibition of Golden’s work this month. Many of the pictures are from 1970s Britain. We catch glimpses of people in their workplaces, among them miners, nurses, engineers and agricultural workers.

The photos intensely capture little moments. In one shot a midwife is delivering a baby. Another shows what appears to be a manager standing over a young woman worker at her desk. Then a welder, deep in concentration.

People are framed within industrialised landscapes, such as on the streets, inside working class homes or sharing lunch breaks at work.

More recent video footage from around Europe is included of regional markets and locally specific cultures. Golden described bringing together the images and films as documenting “two key moments of change in the development of a global culture and economy”.

Home highlights the impact of capitalist globalisation. The dominance of Tesco, McDonald’s, William Hill betting shops, Odeon cinemas and so on undermines the sense of home as a place distinctive to others.

Home is on at the Bridport Arts Centre in Dorset from 15-25 August. Go to www.bridport-arts.com for more details on the exhibtion.

Robert Golden also took photographs for Socialist Worker in the 1970s. For more on his work go to www.robertgoldenpictures.com 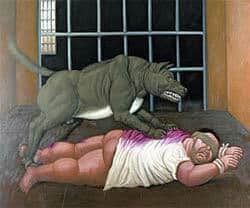 Art inspired by horror in Iraq