Sankara is an overtly political drama. It is based on the life of Thomas Sankara, president of Burkina Faso—formerly Upper Volta—from August 1983 to October 1987.

Director Ricky Dujany illustrates the life and death of Sankara within a Shakespearean framework.

The play starts at a tremendous pace, combining revolt with African dance.

The first word spoken by the statuesque Sankara is “comrades”.

But there is no mistaking that this is a military coup.

In places the rhetoric of the play, using Sankara’s own speeches and sayings, is wonderful. This is combined with some original pieces of wit.

It also helps to show tensions between different African countries and who ultimately benefits from them. And, as Sankara says, “Those who exploit Africa exploit Europe too”.

The audience is directly involved in the play. Sankara addresses the audience, not only as a crowd but as individuals.

We are encouraged to join in the chanting at one point—a brave thing for a director to do.

This contrasts with the main depiction of the political tensions, which are shown as within the ruling elite of the time and not involving the masses. Some of whom are described as “lazy workers” and “children”.

This contradictory attitude is seen throughout the play.

Sankara is shown as being firmly on the side of ordinary people and in particular railing against the oppression of women.

But he is also shown as autocratic, trying to force those around him to accept changes and a lack of privilege that they are not ready for.

This production is nearly three hours long, with an interval. The other warning is that strobe lighting is used occasionally.

This is not the only technology used. Drapes fall across the stage exits and real scenes of political and cultural events from the time are projected on to them.

The film is slightly out of focus, underlining that this is a fictional account of real events.

Dujany may take the Shakesperian analogy too far at one point.

The wife of Blaise Compaoré (whose forces brought Sankara to the presidency) is characterised as being the ambitious one, to the extent of using her sexuality to push Blaise in a certain direction.

Sankara was murdered by his former ally and best friend Blaise so the question is has Dujany shifted the responsibility too much on to his wife?

However, at the end as bodies litter the stage and screams are heard off stage we are left in no doubt that this is literally a tragedy.

I would highly recommend seeing this play. It has the potential to make you both laugh and cry. For a first time author it is very good indeed.

Sankara is on at The Cockpit, Gateforth Street, London, NW18 8EH until 14 April. Tickets from £13
Topics Burkina Faso 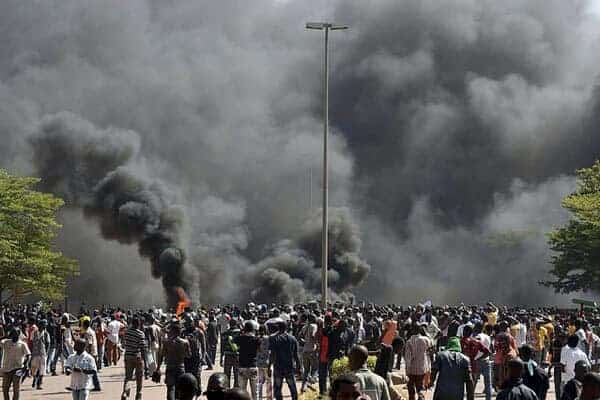