This article is over 9 years, 0 months old
The release of Django Unchained has been met with much heated debate, but Ken Olende says its action and its politics are worth a closer look
Downloading PDF. Please wait...
Tuesday 15 January 2013

Quentin Tarantino’s new film is a violent revenge fantasy set in the years leading up to the US Civil War.

Django, played by Jamie Foxx, is a slave who has been sold after trying to escape. In a striking opening scene a group of slaves are marched across bleak country.

The slave drivers are wiped out by the polite German dentist and bounty hunter Dr King Schultz, played by Christoph Waltz.

Before long Django is working as a bounty hunter too, while trying to track down his wife. She was sold to another plantation.

Considering some of the criticisms made of the film, people might be surprised to hear the politics it references. They are those of the great black nationalist leader Malcolm X, and the distinction he made between field negroes and house negroes on plantations.

Malcolm said the first hate their master and everything he stands for while the second “love him more than he loves himself”.

Tarantino regular Samuel L Jackson relishes playing Stephen, the improbably powerful house negro who loves his master despite the fact that he is obviously the brains that runs the estate.

There are no subtleties. Other than the non-American Schultz, white people are universally loathsome.

Django says of becoming a bounty hunter, “Kill white folks and they pay you for it! What’s not to like?”

There is a class element among the whites. The rich whites are repulsive, but poor whites are also stupid.

Southern society is inaccurately shown as static. The convulsions that led to the Civil War are largely absent. At no point is there any sense that there could be any solidarity between white and black.

What the film does effectively offer is a revenge fantasy of striking images and dialogue.

It also recalls the visceral physicality of plantation racism. It features people crippled by leg irons or held in other restraints. It presents the reality of slavery—torture, rape and castration—more than Hollywood has usually been prepared to face.

A standout image is a slaver’s death as he rides past slaves in a cotton field. Blood stains the white cotton red.

The film looks to a combination of Blaxploitation films and Spaghetti Westerns. The Westerns in particular broke from the rugged individualism of 1950s Hollywood to show societies in violent crisis.

The climax is a shootout in the plantation owner’s mansion, where the walls becomes bathed in blood.

Is it an indictment of a brutalised society or something the director thought would look cool? Probably a bit of both.

You could argue that the film condemns real slaves for not rising up. The evil racist plantation owner Calvin Candie, played by Leonardo DiCaprio, asks of the slaves, “Why don’t they kill us?”

His answer is the natural servility of inferior races, but the truth is that again and again slaves did rise up.

The film is set three years before the outbreak of the Civil War—not two as the opening title states. But it does manage to get across some aspects of horror through humour.

Some racists foreshadow the Ku Klux Klan by riding masked—only they can’t get the eyeholes in the right place to see where they are going.

The issue of why they would feel the need to go masked in a pre-war society when everyone agrees with them is left unanswered.

The whole film is ahistorical. Yet the way it presents slavery, and demands an angry and active response, is powerful.

It would have been more powerful if it engaged with history and class and had any meaty roles for women.

But it succeeds as a bloody fantasy and shouldn’t be condemned for not being another type of film.

Django Unchained - has a white director done slavery because it's cool? 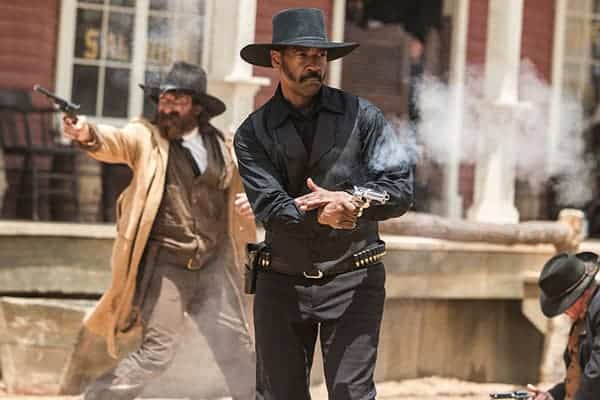