The Age of Stupid: Changing the world to end a stupid age

Capitalism is stupid, and there’s a new film that says so. The Age of Stupid is about the very real threat of catastrophic climate change, but it doesn’t stop there.

The exploitation of natural resources and human beings in the pursuit of profit is powerfully depicted in an inventive and captivating docudrama.

The Age of Stupid is directed by Franny Armstrong. She also made the McLibel film, which championed the successful fight against McDonalds.

The Age of Stupid stars actor Pete Postlethwaite. At the film’s premiere he challenged Ed Milliband, the secretary for energy and climate change, over the government’s policies of building the Kingsnorth coal-fired power station and expanding Heathrow airport.

Using current scientific predictions and recent extreme weather events, the film charts the world’s course towards climate chaos, dramatic climate shift and ultimately the destruction of the global economy and most life.

The Antarctic ice shelves are melting, the Amazon rainforest is ceasing to store carbon dioxide, and the oceans are almost at capacity, leaving carbon emissions nowhere to go but the atmosphere.

Global warming is accelerating while official figures for British emissions have fallen by just 1 percent over the last 15 years.

The film starts in 2055, when London is under water, Las Vegas is under sand, Sydney is on fire and the Taj Mahal is in ruins.

Postlethwaite is “The Archivist”. He lives in a tower off Norway scanning old news videos to find out why it was that people in 2009 did nothing to stop the catastrophes that were staring them in the face. He offers us the privilege of hindsight with anger and sadness.

This is the framework for six real-life documentaries filmed over the last five years.

One of these shows a French mountain guide who has witnessed the swift erosion of the glacier on Mont Blanc, which has lost over 50 metres in his lifetime.

Then there is a capitalist entrepreneur hell-bent on setting up a low budget airline to get everyone out of India’s public trains and “into the sky”.

Menawhile, a British wind energy developer is losing the fight against wealthy locals protesting against a wind farm proposal.

The Age of Stupid is a forceful attack on the system, with deeply

moving video commentary. One traces the destruction of an Iraqi family through the eyes of two displaced and orphaned children, traumatised as a result of the illegal war that started in 2003.

Another shows Shell Oil’s devastation of huge swathes of western Nigeria. Millions there are left with a wrecked economy, drinking the brown sludge that is their water, catching small polluted fish, and suffering debilitating illnesses.

But there is also hope. People are fighting back.

A Nigerian woman is struggling to learn medicine to help her dying community.

The Iraqi children are reunited with their older brother, released from prison as a result of international protests.

The French villagers block the Mont Blanc tunnel on bicycles. They are protesting against road expansion and the trail of articulated lorries taking French milk to Italy to be made into yoghurt to be driven back to France to be packed in plastic containers to be driven to British supermarkets.

Finally we are not allowed to escape the class nature of this rotten system – the wealthy entrepreneur launches his first cheap flight while screaming at his cabin crew as if they are his slaves.

An upper class woman patronises a journalist, describing herself as an environmentalist as she squeals with glee at stopping a wind farm near her land.

The inequality of power and human rights is a constant theme through the film.

It is clear that the injustice is a product of capitalism.

The film was launched to galvanise a new campaign, seeking to mobilise all “Not Stupid” people in the lead up to the historic and crucial inter-governmental climate talks in Copenhagen, Denmark, in December.

Climate campaigners want to see the biggest possible demonstration in London on 5 December, and another huge one at the international protest in Copenhagen on 12 December.

At the end of the film, Postlethwaite’s character asks, did the human race choose to commit mass suicide?

Humans are not suicidal when there is hope.

Global pressure from below may just convince our leaders to change, but it looks like we will have to overthrow this stupid capitalist system before those who run it condemn us all to death.

The Age of Stupid is being shown at selected Vue cinemas across Britain. It is released on DVD on 22 June.

For more information about the Copenhagen protests go to » www.campaigncc.org 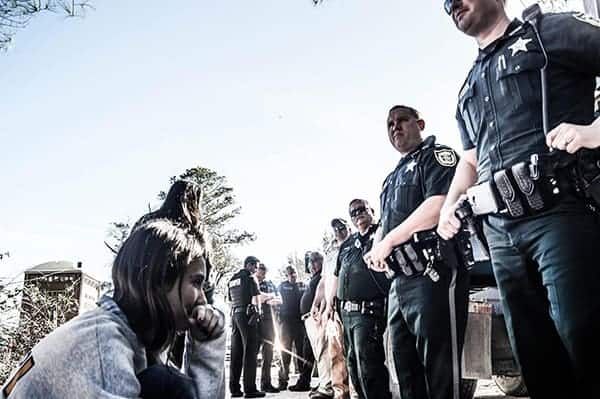 The Shock of the Anthropocene

This Changes Everything: Capitalism vs the Climate