This article is over 14 years, 2 months old
Of all the attempts to mark the 200th anniversary of the abolishment of the slave trade, the Theatre Royal’s current production of Jean Genet’s The Blacks is by far the most successful.
Downloading PDF. Please wait...
Tuesday 23 October 2007

Of all the attempts to mark the 200th anniversary of the abolishment of the slave trade, the Theatre Royal’s current production of Jean Genet’s The Blacks is by far the most successful.

The current production in Stratford – bold, lyrical, musical and deeply impolite – shows not only that contemporary theatre is still very much alive – the theatre was packed with Newham locals – but that it may be the best medium for asking some uncomfortable questions about race, politics and responsibility.

Originally written to celebrate Ghana’s independence in 1957, The Blacks was the longest running off-Broadway play of the 1960s.

Since then, however, it has rarely been performed, perhaps due to a combination of its all-black cast and its profoundly confrontational stance.

The premise of the play is that a group of “blacks” stand accused of the murder of a white woman, an event which they are forced to ritually re-enact for a group of “whites”, who represent the monarchy, the judiciary and the military.

Through the use of masks, black and white facepaint and stereotypes taken so far to the limit they implode in upon themselves, the cast takes us through a discomforting yet exhilarating ride through antagonism, hatred and prejudice. We emerge on the other side with a peculiar kind of hope and anger.

Throughout the play, a large screen with the word “Apologise’ hangs to one side. This is a taunt to the current establishment, whose mealy-mouthed pronouncements on the horrors of slavery mask an inability to address the true impact and injustice of British imperialism and colonial conquest.

Genet’s original stage direction states the following: “This play, written, I repeat, by a white man, is intended for a white audience, but if, which is unlikely, it is ever performed before a black audience, then a white person, male or female, should be invited every evening… A spotlight should be focused upon this symbolic white throughout the performance.”

The performance in Stratford demonstrates the continued relevance of theatre to social themes.

The Theatre Royal should be congratulated for masterfully bringing Genet’s play to life. Visit it so you can see for yourself how they did it. 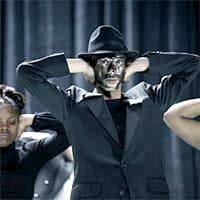 Jean Genet: ‘Apostle of the wretched of the earth’