The election: What kind of twit thinks it’s Twitter wot’ll win it?

This article is over 11 years, 9 months old
Pundits are quick to tell us that this will be Britain’s first "new media" election. Jonny Jones is not so sure
Downloading PDF. Please wait...
Tuesday 13 April 2010

The advent of social networking sites such as Facebook and Twitter will herald a new age of voter-driven, grassroots politics. So says Labour’s new media spokesperson Kerry McCarthy.

It will “drive the news agenda and accelerate the pace at which announcements are disseminated, dissected, challenged,” she says. And she warns, “Politicians who aren’t willing to engage in this way will lose out.”

McCarthy is joined in this chorus by her opposite numbers from the other parties, and by choirs of journalists who are busy obsessing over Twitter feeds and Facebook sites.

This new media hysteria marks the latest in a long line of transformations in the way elections are fought.

In 1983 a BBC Panorama report, The Marketing of Margaret, famously exposed the behind-the-scenes ­operation used by the Tories to harness modern media techniques and computer technology for the first time.

And the 1990s and 2000s saw an increased reliance on billboard advertising, communicating “slick and snappy” political messages—like the laughable “Are you thinking what we’re thinking?” slogan the Tories used under Michael Howard.

All this was supposed to bypass the need for an army of canvassers who would actually talk to voters.

Behind the bluster lies the fact that political parties have been forced in this direction by an ever-decreasing number of activists.

The Labour Party lost almost 250,000 members—more than half its card carriers—in the ten years after being elected in 1997.

And the News of the World newspaper revealed secret Tory documents in December 2008 that showed the party’s membership had slumped since Cameron became leader.

The paper said the leak showed that “the ageing membership is dying off and the party is failing to attract youngsters”.

Party membership figures today pale in comparison to the 1950s, when the Tories had three million members and Labour had over a million.

In light of this catastrophic decline, social networking and new media seems to provide a cheap and easy way to connect with millions of people—after all, Facebook has 24 million users in Britain alone.

And to many party spin doctors, it seemed that Barack Obama’s 2008 election campaign provides proof that this sort of thing works.

But does it really?

Much is made of the role of new media in winning Obama the presidency. But the internet was just one part of a much larger campaign—one which saw many thousands of people that register to vote, deliver leaflets and host fundraising events.

The most important thing about Obama’s campaign was the way it connected and energised real people, not online avatars.

The internet was used as an effective way to organise activists—not to replace them.

Thomas Gensemer, one of the key players behind Obama’s internet strategy, said that the key to the campaign was “giving people real things to do in their neighbourhoods”.

The worshippers of new media as the solution to all ills enthuse about the “decentralised and democratic” nature of this kind of campaign.

But their rose-tinted view contrasts starkly with those of David Plouffe, Obama’s campaign manager.

He said, “We wanted to control all aspects of our campaign…We did not want to outsource these millions of people, and these hundreds of thousands of full-time volunteers.”

It wasn’t a cheap fix: the campaign spent more than £5 million online.

Millions flocked to Obama’s banner of “change” in revulsion against George W Bush’s pro-war, pro-rich policies. And Obama’s team was able to tap into this popular mood on a number of levels.

As Plouffe explains, “Supporters would share our positive message or response to an attack, whether through orchestrated campaign activity like door-knocking or phone calling or just in conversations they had each day with friends, family, and colleagues.”

For all the talk, it is hard to see how the same kind of campaign could be conducted in Britain today.

Millions of people are sick of our politicians for hire. They hate the talk of “savage cuts” that comes from all parties. They rail against Brown’s bank bailout and the privileged elite that run the Conservative Party.

No party in Britain today can claim to have an ounce of the enthusiasm that propelled Obama into the presidency.

So when Labour’s deputy leader Harriet Harman says, “This is a word of mouth election, won by people not posters, and Labour is determined to make sure this is a grassroots election campaign,” it is hard to take her seriously.

Only the most foolish could imagine that new media is a shortcut to “reconnecting” to the voting public.

The internet can be a great tool for activists—but it is worse than useless if people start to believe it can be a replacement for real members and work on the ground. 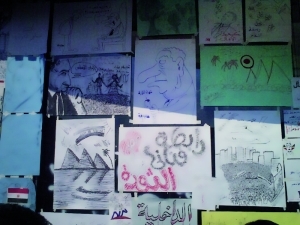 The King and the Playwright