This article is over 9 years, 8 months old
Jaswinder Blackwell-Pal is impressed by a new exhibition devoted to the Bauhaus
Downloading PDF. Please wait...
Tuesday 08 May 2012

The Bauhaus was a pioneering German art school that was central to the modernist movement of the early 20th century.

The Barbican art gallery’s new show is the biggest Bauhaus exhibition in Britain for over 40 years.

It charts the school’s history from its opening in 1919 to 1933—when it was shut down by the Nazis.

The school was founded in Weimar Germany by Walter Gropius, an architect who wanted to put artists and craft workers on an equal level.

Bauhaus quickly became the vanguard of the artistic scene, attracting students from across the world and developing its own style.

The school had a modern outlook and wanted to create unity between art, science and technology. Its designs were revolutionary at the time and had a huge influence on art, design and typography.

The Barbican’s exhibition is vast and traces the history of Bauhaus chronologically as it evolved through different artistic phases.

The sheer diversity of the show is breathtaking. The pieces range from oil paintings to teapots, sculptures to children’s toys, wall hangings to carpet samples.

Bauhaus developed an all-encompassing attitude to art, designing objects which could be used in everyday life by ordinary people.

But the irrationality of the capitalist system ensured they were never able to mass produce their work.

There’s no logic for capital in producing affordable beauty. Instead, some of the most famous pieces to come out of the school, such as Marcel Breur’s Club Chair, have been recreated as luxury items selling for up to £1,000 a piece.

This is a shame, because the exhibition shows just how visionary the school’s approach was.

Leading teachers like Johannes Itters took an almost scientific approach towards art. In one piece Itters takes a classical painting and meticulously analyses its composition, while also writing words that capture the feelings the art evokes.

Bauhaus also became a lifestyle. The school would regularly throw huge parties and festivals as well as putting on plays throughout the year.

One of the most interesting aspects of the exhibition are the photographs which document the behind the scenes life of the school and show how working and socialising became one.

The only problem with this is that is sometimes makes Bauhaus seem like a bubble, forging its own artistic path outside of the wider historical forces. The exhibition ends abruptly with the school being shut down by the Nazis.

Because of the lack of political context in the rest of the show this can seem sudden and unexplained.

The Nazis hated Bauhaus—but the exhibition veers away from explaining why the school’s progressive politics and revolutionary attitude towards art so threatened the fascists.

Despite this the Barbican exhibition is excellent and well worth a visit. It shows us an alternative vision of design and what artistic movements can be capable of. 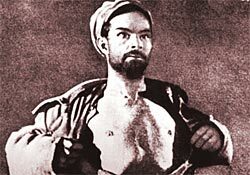