This article is over 8 years, 10 months old
A powerful new film, The Happy Lands, recreates the General Strike of 1926 with non‑professional actors and relatives of the strikers, says Greg Jones
Downloading PDF. Please wait...
Tuesday 05 March 2013

Events that occurred around mining villages of Fife during the General Strike are recreated in the fictional town of Carhill in The Happy Lands.

It took over four years to make and involved more than 1,000 residents of Fife.

This includes relatives of the miners who struck more than 80 years ago. Many relatives feature in the film as actors, interviewees and narrators.

In 1926 British coal bosses tried to maintain their profits by cutting workers’ wages and making them work longer. The miners’ slogan became, “Not a penny off the pay, not a minute on the day”. They triggered a general strike of 1.7 million workers.

This well-written story centres around three families. They are the trade unionist Guthries, the angry embattled Baxters and the Brogans. All of them are struggling with loyalty, honour, love and trust in the middle of the strike.

The film avoids a preachy or sentimental caricature of the strike as good, honest workers fighting the evil bosses. It escapes this with compelling, vivid performances.

His court scenes as a magistrate who is later also a prisoner in the dock are funny and convincing.

Rebeka Venters is moving as the young mother Rosie Baxter struggling with the extreme hardship of the strike.

The Happy Lands comes across as a real story told by real working class people. It feels authentic in a way that a big budget film with Hollywood stars never could.

It is also well produced and looks good. And it feels relevant with parallels to today.

There is even a black South African miner describing their horrific conditions.

It doesn’t deal particularly with the role of the trade union leadership—in Fife the miners get told what is happening by telegram.

Nor does it have much to say about the role of the Communist Party which at the time contained almost every serious revolutionary.

But it does creates a compelling story that feels as if workers in Fife are telling it themselves.

It doesn’t yet have a commercial distributor but a roadshow is planned across Britain.

The Happy Lands, directed by Robert Rae
For screenings see the Happy Lands Facebook page via the link on www.thehappylands.com 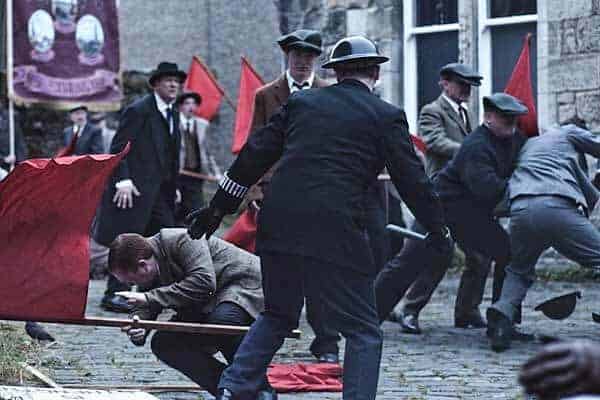