Kurt Vonnegut: Unstuck In Time explores the life of the author who witnessed atrocities and explained them through science fiction
By Nick Clark
Downloading PDF. Please wait...
Monday 01 August 2022

“Listen”—this documentary begins the same way that Kurt Vonnegut began his defining novel. The film—apparently some 40 years in the making—is an insight into the extraordinary life of the author.

That includes the experience that hung over him for decades until he eventually tried to expunge and describe it in Slaughterhouse Five. As a prisoner of the Germans in the Second World War, Vonnegut witnessed the Allied firebombing of Dresden—a carpet bombing campaign that flattened the whole city.

In archive footage, he describes then having to dig corpses out of the rubble. Decades later, as he wrote Slaughterhouse Five, he found he could only describe the horror through humorous, irreverent science fiction.

The main character Billy Pilgrim is “unstuck in time”—jolted back and forth in a jumbled timeline of his own life. It gave Vonnegut the distance he needed to come to terms with the event—and an ironic indifference summarised in the deliberately jarring catchphrase “so it goes.”

“I experimented with the science fiction idea, using it for some relief, to get some distance from a tragedy of this sort,” Vonnegut says. “To see how much it really matters in the long view.”

The book was an instant hit when it was published in 1969. As academic Jerome Klinkowitz explains, “It was the right place at the right time. It was in the ugliest of the Vietnam War in the ugliest phase of our domestic crises at home.”

Yet the documentary spends little time exploring the politics of Vonnegut’s work. We get snatches of writing that excoriated US society. But director Robert Weide doesn’t seem to want to dwell here.

His film doesn’t quite give us that explanation. But it did make me want read Vonnegut again. 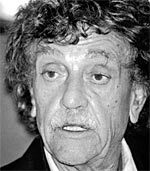 How our rulers bomb for power